With the recent story about the mother accused of taking her young daughter into a tanning booth, will sunburns become the new “red flag” for social services? 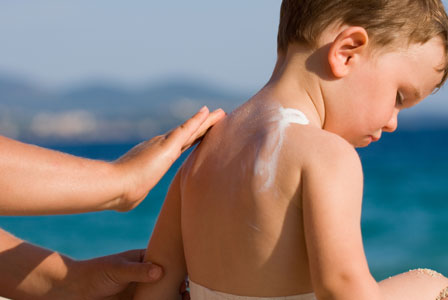 There was a time when that sun-kissed look was considered “healthy,” and most children sported some shade of reddish-brown by the end of the summer. What has changed? Are we going too far in our attempts at making sure kids are safe?

The damage is done

Indoor tanning beds expose the user to ultraviolet (UV) rays just like the sun, and are not a safe alternative by any means. California and Vermont have recently implemented regulations banning children less than 18 years of age from tanning, and more states are expected to follow. According to the U.S. Centers for Disease Control and Prevention (CDC), people who begin indoor tanning younger than age 35 have a 75 percent higher risk of melanoma.

Experts now know that even the slightest bit of tanned (or burned) skin signals damage to the skin cells. Basal-cell and squamous-cell skin cancers are thought to occur as a reaction to years of sun damage. Melanoma, on the other hand, may develop more as a response to brief and intense sun exposure — like a blistering sunburn. According to The Skin Cancer Foundation, skin cancer is the most common form of cancer in the U.S. with one in five people diagnosed with skin cancer in their lifetime.

It’s better to just say no to tanning >>

Kids are at risk

Children’s skin is particularly vulnerable to damage from the sun’s rays. The CDC reports that just a few serious sunburns during childhood can increase the risk of skin cancer later. Because the risk for developing melanoma doubles when you experience more than five sunburns at any age, it makes sense that we should protect our children from sun damage from the time they are very young.

“We do think kids are more vulnerable, and animal models of melanoma agree with that,” said Dr. Lynn Cornelius, chief of dermatology at Washington University. Parents can help protect their children from increased sun exposure by using and re-applying sunscreen, avoiding the sun during peak hours and having them wear protective clothing.

Does anyone you know suffer from tanning addiction? >>

Is a sunburn child abuse?

We may never know for certain if Patricia Krentcil — the New Jersey woman now infamously known as “tanning mom” — really did take her young daughter into the tanning booth with her. School officials reported that the girl had a sunburn that she said she got while “tanning with mom.” Krentcil claims that her daughter was sunburned while swimming in a kiddie pool, not at the tanning salon.

Obviously, taking a young child into the tanning booth is irresponsible. What about simply forgetting to re-apply sunscreen at the swimming pool, or leaving your child’s hat at home? Parents need to take precautions in the sun in order to protect their children from sun damage, but mistakes happen.

The smartest thing you can do is to become vigilant about sunscreen and sun protection, and to not beat yourself up if your child suffers a burn. Simply being educated about the dangers of the sun puts you one step ahead.

9 hrs ago
by Debbie Feit