Every parent has done it, even though you said you never would: You’ve used the TV as a babysitter. And it worked — so well in fact, that you’ve used it again and again. Real parents share their anecdotes of what led them to cave, and why they changed their minds about the beauty of the boob tube. 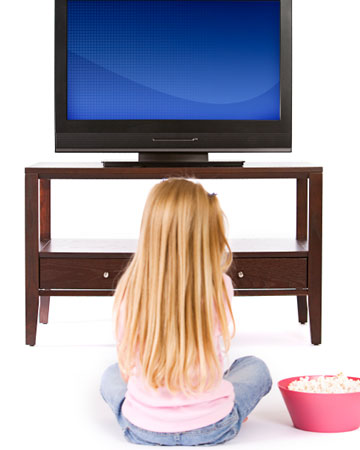 The American Academy of Pediatrics recommends that children under 2 stay away from television, but there are tons of television programs and DVDs that are marketed toward that age group so many parents relent. For older kids? TV is a main attraction. And let’s face it — letting your kiddo watch TV can be, at times, a necessary tool if you want to cook, clean, bathe or relax for a half hour. You may not be a huge TV fan, but if you let your kids watch TV so you can get things done, you’re not alone.

So stuff can get done

Many moms turn to the tube so they can get things done around the house that would be difficult (or impossible) to do with a little one underfoot. “Sure do, or stuff wouldn’t get done,” Jessica from Canada told us. “While I cook and clean — not always, sometimes she plays awesomely by herself. And sometimes when I want to chill for a bit, or she’s fussy before bedtime and nothing else will do.”

Kimmy, mom of three, agreed. “My kids watch TV every night so I can get dinner on the table,” she shared. And Rachelle from Ohio has a similar routine. “My kids watch too much TV, but seriously, I could not get anything done without it,” she said. “I insist that they go outside or play in their room, but that may last 10 minutes.”

And tons of moms told us that showering was a big reason they let their littles watch television. “I will stick my guy in his high chair in front of the TV if I need to grab a quick shower,” said Niki from Indiana.

Even moms who don’t want their kids watching TV will rely on the talking box in certain situations. Kayla, mother of one whose husband accidentally shot himself in the hand recently, is a good example of an extraordinary situation leading to more TV time.

“I have let her watch TV more since Erich shot himself,” she shared with us. “I just can’t do it all at the moment. Normally, she might watch one show a day while I make breakfast and that’s it. But since I’ve had to wake up every few hours for medication schedules and changing bandages, helping Erich shower or put clothes on, I can barely keep my house picked up or make a meal.”

Other moms let their kids watch more when they themselves are under the weather. “I use the TV when I’ve been sick and can barely function,” said Kayte, mom of four. Lindsay from Texas agreed. “He watches more when I’m sick as a dog,” she explained. “It is so hard to entertain a toddler when your head is throbbing. The only show that works is hockey. Otherwise there is no point in using the TV here!”

Other moms don’t even bother because the results can be less than spectacular. “I did last week and remembered why I don’t,” Noelani, mother of one, told us. “Malachi [age 3] was in a terrible mood after and screamed for an hour when it was bedtime. Quiet during the day is not worth an impossible bedtime routine.”

So whatever your take on television watching, if you resort to the TV, keep it on a developmentally-appropriate channel and know that you, mama dear, are definitely not alone.

Is your child watching too much television?
Television as a conversation starter
Mom vs. Dad: The TV debate

53 mins ago
by Sydni Ellis