Tori Spelling has a case of the first-word woes! She shared today that she was disappointed over what her daughter Hattie uttered as her first word — and even confessed that she keeps score with her husband Dean McDermott and she felt like he won this round. Find out what Hattie said and tell us if you can you relate to Tori’s disappointment. 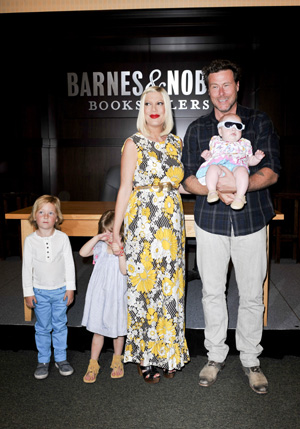 The first word is a huge milestone in your baby’s development — and it’s often followed by calling the grandparents, writing it in the baby book and posting it on Facebook for all your friends and family to see. But what if you aren’t happy with the first word choice?

Most babies start babbling around 6 months old — and Tori Spelling’s 7-month-old daughter, Hattie, is right on schedule. Spelling, who has three children and is currently pregnant with her fourth (and looking amazing, by the way!), admitted that Hattie’s first word brought on mixed emotions.

“Miss Hattie hit a big milestone last week when she said her first word. It was bittersweet as she uttered the word, ‘DADA,'” she wrote on ToriSpelling.com. “I’m sure that mamas everywhere can agree that I wouldn’t be human if somewhere inside, beneath the beaming pride I felt about her accomplishment, there wasn’t a little sadness that her first word wasn’t “MAMA.”

Spelling said her son, Liam, also said “Dada” as his first word, and she said she was a “little sad,” but said he was “Daddy’s dude from the jump” so she understood. “He was my first, so while I was a little sad, on the whole I totally got it and was proud,” she writes.

Her daughter Stella, however, was a baby after mama’s heart!

“Stella, on the other hand, is SO me. Her first word was ‘MAMA,’ and her second word was ‘SHOES’ — we were kindred spirits from the start,” Spelling wrote. “I’d be lying if I said I didn’t do a little dance when Stella first uttered ‘MAMA,’ and used my not-so-inside voice to exclaim, ‘Yes, I won one!'” 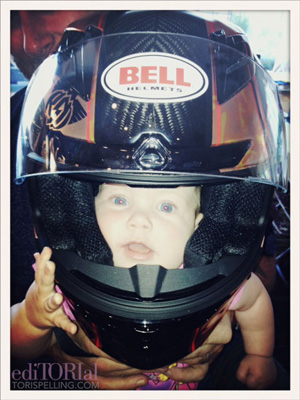 In fact, Spelling admits that she can’t help but feel that Dean won and she lost this first big important parenting step with Hattie, pictured right.

“Was there something wrong with me that I was somehow keeping parental score as judged by my children’s verbiage?” Spelling asks.

Many parents can relate to feeling some disappointment over their child’s first word. Both of my boys said “mama,” as their first word. However, it could be because I kept repeating it over and over (ahem, some call it brainwashing, I call it learning by repetition!).

Spelling might be reassured (although Dean might not be too happy!) to know that “Dada” might not actually be Hattie’s first word. Most babies start talking “baby talk” or babbling around 6 months and experiment with different sounds, such as “ba-ba-ba” or “da-da-da.” According to one expert source, they actually don’t know what they are saying and are just making sounds.

Most babies don’t begin saying basic words that they truly understand until 9 to12 months old. Perhaps she should give Hattie a couple of months and see what she is saying?

What was your child’s first word? Can you relate to Tori Spelling’s disappointment over the first word?

10 Ways to get your baby talking
Cracking the code: The secret language of babies
Delayed speech in 3-year-old is a problem