Happy Wednesday Hump Day, also known as Celebrity Baby Bump Day! What pregnant celebrities caught our eye this week? Anna Paquin and Stephen Moyer’s True Blood baby bump is getting bigger! A very-pregnant Reese Witherspoon was glowing and gorgeous at the Cannes Film Festival, while Kourtney Kardashian caught some grief in a maternity romper. Elizabeth Berkley and Melissa Joan Hart round out our list of celebs with cute baby bumps. 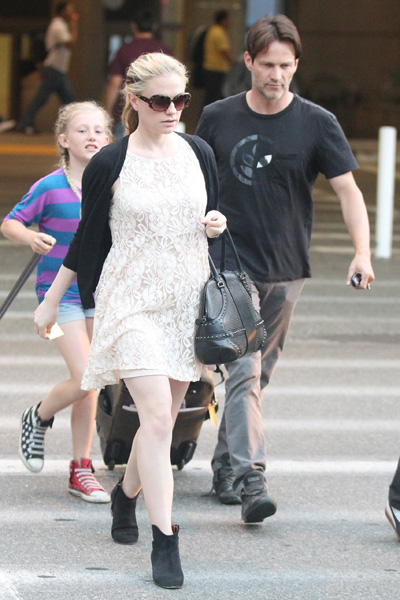 It’s a True Blood baby for Sookie Stackhouse and Bill! Pregnant Anna Paquin showed off her growing baby bump in a white lace sundress paired with black booties and a cardigan as she was picked up at the Los Angeles airport on Memorial Day by her husband, Stephen Moyer, and his daughter, 10-year-old Lilac.

How late in pregnancy can you travel by airplane? >>

This will be the first child for the 29-year-old actress, however Moyer has two children, Lilac and Billy, from a previous relationship.

The married couple has been hard at work on the fifth season of HBO’s True Blood, which premieres on June 10. Many fans have wondered how they will work around Paquin’s pregnancy in the show. Will Sookie be pregnant with the vampire baby of Bill… or Eric? As much as we would love to see a fairy/vampire baby, Paquin was early in her pregnancy when they wrapped up filming for this season so most insiders think there will be no baby this season.

Next up: A gorgeous and glowing pregnant Reese Witherspoon at Cannes

5 hrs ago
by Eugenia Miranda Richman