As National Foster Care Month winds down, we talked to MéLisa Lomelino — a foster parent who has adopted six children. MéLisa talked with us about her own family, as well as about the foster care system in general. 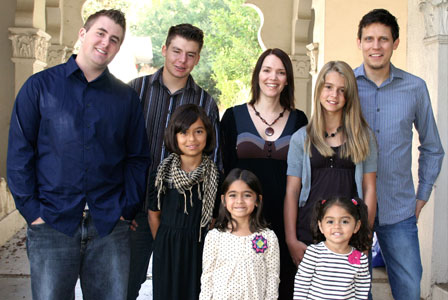 My husband and I have adopted three children from foster care (and fostered several others) and while on our foster-adopt journey, we have met a lot of interesting people along the way — both online and in “real” life. Though there are many preconceived ideas about the types of people that are foster parents, the reality is that no two foster families are alike. Recently I was introduced through email to MéLisa Lomelino. MéLisa and her husband Ryun Hovind have adopted six children.

MéLisa and Ryun always knew that they wanted to adopt children and got their foster care license as soon as MéLisa was old enough. Their family received their first foster placement two weeks before MéLisa’s 21st birthday. All of a sudden at not even 21, MéLisa was the temporary mom to a 12-year-old. As MéLisa recounts the story of the six months the child was in her home, she says that the experience was a million times harder than she could ever have imagined. Though the first placement ended with the child being admitted to a psychiatric facility, that didn’t discourage MéLisa and her husband from wanting to continue helping children.

Read about moms meeting their babies for the first time >>

One day, the couple received a call about a 3-year-old boy who was part of a package deal with his 5-year-old brother, and this wasn’t just a strictly foster situation — the agency was looking for an adoptive home. In less than two weeks, the boys were moved into their home forever. Over the next few years, their family went through a lot of changes — adopting a third child, who was 18 months old at the time, along the way. In just three years, they went from a carefree couple who played in a band together to a family of five with special needs kids.

The family moved and they toured a lot with their band (often taking the kids along with them). And eventually they settled in Los Angeles, where they went through the process to get their foster care license once again. The couple thought they’d adopt another child eventually, maybe two. Little did they know that three more kids were in store for them.

Read about celebrities who became parents through adoption >>

And now here they are — a blended, transracial family with six kids, two cats and two parents trying to balance marriage, parenting, art and passion.

MéLisa says, “We’re both in our mid-thirties and we have a lot less time, money and sleep, but we honestly wouldn’t change a thing.”

Read more about foster care, adoption and the Lomelino family at AdoptiveLegacy.com >>

Next up: MéLisa talks about the foster care system >>