Can dirt be fun? Here are five things I’m loving this week that you can do with dirt (yes, you read that correctly).

Can dirt be fun? Here are five things I’m loving this week that you can do with dirt (yes, you read that correctly).

As a mom of all boys, I’ve become an expert on dirt. 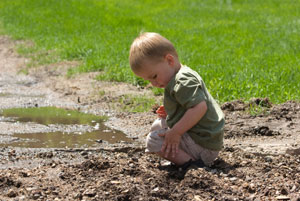 My sons are attracted to dirt like I’m attracted to a fabulous sale at Macy’s! It’s just something they can’t avoid and when they see it, they dash for it. I swear there’s some sort of DNA in boys that makes them love dirt from birth on.

It never ceases to amaze me what my sons will do with dirt, so I’ve thrown up my hands and just accepted the fact that this is what boys do. To be honest with you, I kind of get a kick out of it. So much so where I have joined in on the fun and have been doing some really cool things with them and (well) dirt.

So what am I loving this week? I’m loving the fact that I’m sharing some really cool things that you can do with dirt. (Warning: you will get dirty.)

My sons kept wanting to garden with me, so I did the next best thing, I let each of them create their own small garden. They loved digging in the dirt with me to plant bulbs and flowers, so I sectioned off four small areas in the yard and let each of them have their own small piece. I took them to a local nursery and let them each pick out seeds and two flowers each for their garden. They went to town in the dirt planting away! Every day they check on their little garden, water it and make sure everything is looking good.

My sons and their friends are obsessed with Pirates of the Caribbean. They love to pretend they’re pirates hunting for treasure in our yard with their friends. I started burying small things (plastic balls, figurines, etc.) throughout our backyard for the boys to have some fun on an “actual” treasure hunt. Everyone gets a shovel, I give them hints as to where the treasures are buried and around the yard they go (for hours!). It’s the best ever!
3

My sons love dinosaurs. They think it’s the coolest thing that people actually find dinosaur bones by digging them up. They didn’t quite understand how it all works, so I came up with our own little dig. I cut up pieces of cardboard to represent bones, dig a hole in the dirt and spread them out in the hole. I cover it up with dirt and then have the boys take forks and rake away until they find all the bones. It takes some time, but they love it and have so much fun.
4

No, not that kind. If you have a slip and slide, you’ll be able to do this. And believe me, I don’t do this too much — this originally happened by accident. My sons were on the slip and slide last summer, and slowly more and more dirt kept getting on the slide. Before long, it was a dirty slide that the boys were having a blast sliding down. We called it “mud slides,” and so the dirtiest way to slide was born. Take it from me, the laughter from this is contagious!
5

Oh, yes. I said it. I take the hose, wet down some of the dirt and allow the boys to go to town creating mud pies! It’s the messiest thing in the world, but I’ll tell you what, the smiles on their faces are priceless!

11 hrs ago
by Kimberly Dawn Neumann