Amanda Langston has 6-year-old twin boys, Ian and Ryan. Ian is typical and Ryan has Down syndrome. The New Jersey mom says she never could have imagined that Ryan, who had open heart surgery at three months, would one day model for major retailers. But with a catalog appearance for Nordstrom in 2011 and a Target ad in January, the modeling world is Ryan’s reality.

Why he loves being in front of the camera

Amanda Langston has 6-year-old twin boys, Ian and Ryan. Ian is typical and Ryan has Down syndrome. The New Jersey mom says she never could have imagined that Ryan, who had open heart surgery at three months, would one day model for major retailers. But with a catalog appearance for Nordstrom in 2011 and a Target ad in January, the modeling world is Ryan’s reality.

by Amanda Langston
as told to Julie Weingarden Dubin

Ryan’s been modeling since he was 3, and though he has beautiful blonde hair and blue eyes, I often hear that he gets called by casting agents because he’s easy to work with — a true professional who listens to instructions and wears the clothes well. 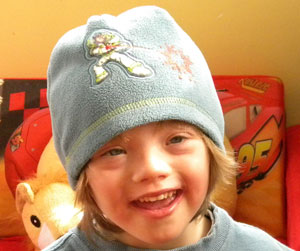 My husband, Jim, works in New York City for a global research company as a sales director and I work part-time for a design company as a sales consultant. We never considered modeling for our kids until we were approached at a party by someone who worked in the industry. After some discussion and research, we contacted a local agency about both boys, but Ian wasn’t interested. However, Ryan really seemed to enjoy his time in front of the camera.

Ryan’s photogenic but he’s also warm, cooperative and enthusiastic. He quickly makes friends on the set with stylists, makeup artists and creative directors. He definitely enjoys being the center of attention and we’ve watched his self-confidence skyrocket. He has a sense of self now that allows him to walk into a room and speak to any individual or group.

Medically, Ryan’s eyes, ears, heart, thyroid, anatomical structure, speech, immune and respiratory systems are all touched by Down syndrome. Sometimes that’s the one thing that really gets to me. He struggles to cognitively keep up and learn. I understand and expect that, but the toll on his body just seems unfair at times. Simple colds take weeks to run their course.

School has been a challenge this past year because Ryan was diagnosed with ADD. He goes to a specialized school for children with Down syndrome and he likes it and wants to learn.

Modeling is an area that allows Ryan to be himself and be appreciated for who he is, not for who he isn’t. It creates a level playing field for him — not academic and not athletic. 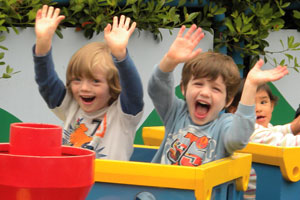 People ask how I can possibly believe that modeling would be a healthy environment for Ryan due to the total emphasis on looks, and overall lack of acceptance of imperfection that embodies the industry. It’s a great question, but our experience has been so positive and we keep it very relaxed.

The Target ad that came out January 1 really brought attention to Ryan’s modeling and it started shining a wonderful light on Down syndrome. The bigger message Jim and I have is to show people how viable and productive individuals with Down syndrome are, to keep doors open to them. It’s arrogant of any of us to set limitations for them. There are individuals in the Down syndrome community that hold full-time positions in corporate America or lobby in Washington on behalf of those with disabilities.

My biggest concern is for Ryan’s future — especially when we’re no longer here for him. You can’t be prepared enough for their adult lives. Hopefully, there will be more independent living facilities for adults with disabilities and medical science will be better prepared to support them.

Ryan’s gift is his ability to charm people. I love his confidence and the way he can put people at ease. Ryan’s proud of himself and he knows he can thrive among his peers — thanks to modeling — a blessing we never expected.

Always trust your mommy instincts. If you feel deeply that something is wrong with your child’s health or academic life, stick to your guns. I’m a firm believer in women and their natural instincts to nurture and protect.