We’ve all heard of Mommy Brain, but did you know that having a baby can change Dad’s brain too? Learn more about the miraculous changes that occur in Dad’s brain during pregnancy and after birth. 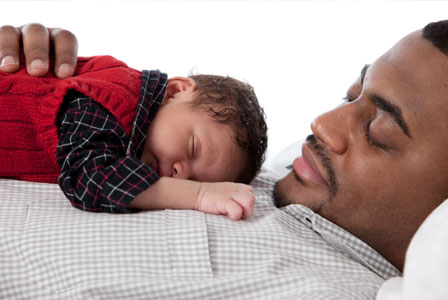 Do dads get stretch marks too?

After you’ve sweated through nine months of pregnancy, earned your stripes in stretch marks and watched your feet grow two sizes, it’s certainly not hard to accept the fact that motherhood changes you. But for dads who get to idly sit on the sidelines while your belly balloons to the size of Nebraska, it isn’t so straightforward how fatherhood changes them too. But believe it or not, new research into the science of fatherhood reveals that becoming a dad changes men down to the cellular level. Here’s how.

Ways to get your husband involved with your pregnancy >>

The birth of the daddy brain

Kayt Sukel, author of Dirty Minds: How Our Brains Influence Love, Sex and Relationship, says, “Parenthood is exactly the kind of event that you might expect to harness the brain’s natural neuroplasticity to help prepare individuals for the adventure that awaits. Given the sheer number of physical changes that a woman goes through, you’d expect that some major rewiring might be happening in the brain. But work in animal models suggests that Dad’s brains are getting a bit of reorg, too.”

Parenting and the plastic brain

It has been well-documented that pregnancy and childbirth trigger hormonal shifts in the female body and changes to the brain that help moms rise to the challenge of day-to-day parenting. Our brains are very plastic and they are neurologically wired to help us adapt to motherhood and care for our babies.

But here’s the interesting part. These same changes are now being seen in the male brain, too. In fact, before Baby even arrives, Dad’s brain begins to release more of the hormone prolactin (known to stimulate breast development and milk production in women) and produce less testosterone. After the baby’s arrival, dads also get a healthy boost of prolactin and cortisol, just like moms do.

Fact or fiction? The mommy brain >>

How much will dad change?

As time goes on, it’s up to dad whether he continues to change. For dads who are very involved in the day-to-day demands of parenting, there are significant hormonal changes as well as shifts in the structure of the brain itself. For dads who leave most (or all) of the childcare duties to mom, the results are less profound. Jeremy Adam Smith, author of The Daddy Shift explains, “A father’s body changes (diminishing testosterone plus rising prolactin and cortisol) only if he maintains a connection to the mother and newborn child. Feelings of attachment grow in environments that can either squash the attachment or allow it to flourish.”

Being an involved father

For dads who are interested in developing close, loving bonds with their babies and growing children, the good news is that science is on your side. Early involvement seems to be key to creating biological changes that support and encourage deep bonding and continued involvement in children’s lives.

“By increasing these connections and receptors, Dad is primed not only to help care for kids, but also to better bond with them,” says Sukel.

Learn more tips on how Dad can bond with Baby >>

WTF: When did men start breastfeeding?
If dads help more, will moms have more babies?
Mom vs. Dad: The sweets debate