This is a case of motherhood gone bizarre! Patricia Krentcil, a mother of five in New Jersey, has been charged with allowing her 6-year-old daughter in a booth at a tanning salon, causing the girl to get sunburned. 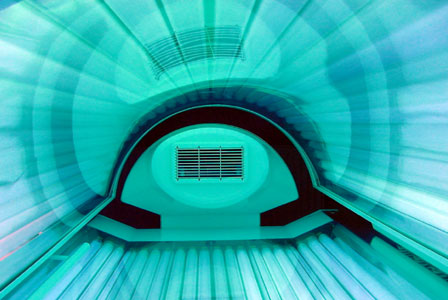 It’s like looking into a crystal ball and seeing Snooki and her future Guidette or Guido in training.

In Superior Court in Newark, on Wednesday, May 2, Patricia plead not guilty to a felony child endangerment charge for allegedly letting her 6-year-old daughter, Anna, into a tanning booth at a local salon. In the state of New Jersey it is prohibited for anyone under the age of 14 to use tanning salons.

Denying or in denial?

The leathery lady denied the charge, saying, “I’ve been tanning my whole life, going to the beach, tanning salons and so forth. I tan, she doesn’t tan. I’m in the booth, she’s in the room. That’s all there is to it.” But is that really what happened?

Patricia also likened taking her daughter tanning with her to any errand normal moms run with their kids in tow. She defended, “It’s like taking your daughter to go food shopping. There [are] tons of moms that bring their children in.” Nice defense, Patricia! Just because other moms do it, that doesn’t make it OK! 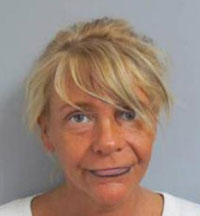 Of actually putting her daughter in a tanning booth, Patricia said, “It didn’t happen. She’s 6 years old. Yes, she does go tanning with Mommy but not in the booth. The whole thing’s preposterous!”

Her attorney, John D. Caruso, defended Patricia, stating, “My client is 150 percent innocent. That child was never in that tanning booth.”

But we’re not so sure. The whole thing started when young Anna told her classmates and a school nurse that she got her sunburn from “tanning with Mommy.” Patricia says her daughter simply got burned playing in the backyard on a hot day.

How to win your sunscreen battles: Great products kids will let you apply >>

Was she lying or is Patricia? And still, shouldn’t this mom be putting sunscreen on her fair-skinned daughter if she’s playing outside on a hot day? Moms, we all forget to slather up the kids with SPF every now and then, but it’s clear that this tanorexic mom has no grasp on the dangers of UV rays.

Read about the teen who went missing, faked a pregnancy >>

The oompa-loompa-esque woman continued to defend herself outside the courtroom, insisting it was all a misunderstanding. She said, “Look at my daughter’s picture, she’s as pale as a ghost, she has red hair. I’m a great mother, I’m a wonderful mother. I would die right now for her.”

Patricia was charged with felony child endangerment and released on a $25,000 bond. She is expected back in court on June 4, and, if convicted, Patricia faces around 10 years in prison. At this time, daughter Anna has been allowed to stay with her mother.

Do you think this is a real crime or a misunderstanding?