Got milk? Some men say they do. And they’re using their man-teats to breastfeed their babies. (Say what?!) Believe it or not, male lactation is not impossible and has been documented throughout history, even as far back as the Bible. 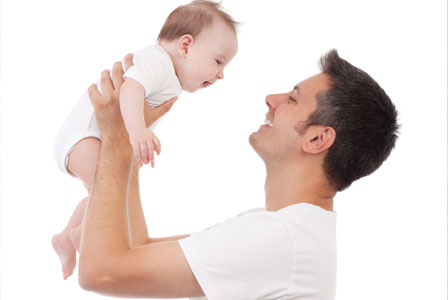 Learn more about men who breastfeed.

There’s a scene in the movie Meet the Fockers, where Robert De Niro, in an effort to bond with his grandson, straps on a booby bra that he invented called “The Manary Gland.” His family looks on in amazement and horror while everyone in the audience howls with laughter as Robert De Niro says, “There’s nothing to be ashamed of. Breastfeeding is perfectly natural.”

When I watched this scene, I laughed so hard I nearly peed my pants. But why? An image of a woman breastfeeding creates warm feelings of tenderness and love. Switch it to a man and you’ve got top-rate comedy or a bad case of hives. Which is why I was shocked to learn that men are not only capable of breastfeeding, but that they’ve been doing it for thousands of years.

Turns out, men have milk ducts and mammary tissue just like women. If they are stimulated enough, in some cases they can actually produce breast milk. From Tolstoy to the Talmud, there are reports of male breastfeeding. Even as recently as 2002, a Sri Lankan man successfully breastfed two infant daughters after his wife passed away in childbirth. In Central Africa, there is a tribe called the Aka where men and women equally share the responsibilities of childrearing — including breastfeeding. There’s no stigma attached to any parenting duty and the men are quite happy to stay home and suckle babies while their wives go off to hunt for dinner.

Although I must admit my initial reaction to male breastfeeding was laughter and squeamishness, there’s something to be said for a culture that is more interested in good parenting than in upholding gender stereotypes. Most reported successful instances of male breastfeeding were born out of a man’s natural desire to feed his baby when his wife was unable to.

Of course, even if the nipples are dry, there are still benefits from allowing the infant to suckle and from the nurturing skin-to-skin contact that happens while breastfeeding. In fact, the most current research demonstrates the vital importance of skin-to-skin contact between infants and their parents. When infants are kept skin-to-skin, they are happier and thrive better. From improved breathing and stable heart rates to deeper sleep and increased weight gain, the benefits are extraordinary.

And why shouldn’t Dad be involved? Even if it’s with his nipples.

Boobs in bikinis are OK, as long as you don’t breastfeed
Guide to breastfeeding for working mothers
How to safely store breastmilk

12 hrs ago
by Lauren Wellbank

18 hrs ago
by Emilia Mense Caby