From the co-creator of Yo Gabba Gabba comes a new musical superhero show for kids who are ready to transition from a party in their tummies to a punk rock pool party in the back yard. 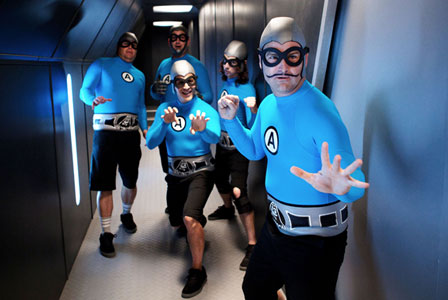 Fun and quirky without being too grown up, The Aquabats! Super Show! is breeding a new generation of music lovers.

Have your kids outgrown the messages of “don’t bite your friends” and the sweet songs of the Yo Gabba Gabba gang? It’s time to check out The Aquabats! Super Show!, a music-themed show starring cult-favorite surf-rock band, The Aquabats and produced by the co-creator of Yo Gabba Gabba.

Established in the mid ’90s, the Aquabats have garnered fans from all over the world with their quirky albums and wild, costumed stage shows. Kids who saw their shows almost 20 years ago now have kids themselves, and those kids will love this witty, adventurous show that features original music, live action and animated sequences.

According to Christian Jacobs, executive producer and fearless leader (and lead vocalist) of The Aquabats, “There’s a lot of different influences on the show but collectively the biggest influence would have to be the old Batman show from the ’60s.” He mentions Japanese monster movies and The Muppet Show as other influences. “It’s not really our world, it’s just some kind of hyper reality of our world.”

The campy, manic pacing and humor have the same polarizing love-it-or-hate-it effect on parents that Yo Gabba Gabba has become famous for. As with Yo Gabba Gabba, The Aquabats! Super Show! features guest stars from the entertainment and music industries. Jacobs was able to share a few hints about the season’s guest stars, including Jon Heder, Lou Diamond Phillips, Sam Levine, Weird Al and Rip Taylor.

Jacobs looks forward to seeing the show’s fans at The Aquabats shows. “There’s no reason kids can’t come to a show, other than, it’s up to the bands to open the door. The Aquabats, we always wanted to be able to open that door. Let little kids come and be able to enjoy something too.”

Learn how to encourage kids’ creativity >>

Adults will enjoy The Aquabats! Super Show! as much as kids, so tune in or program your DVR to pick up the show, which plays on The Hub on Saturdays at 11am ET.