The TSA has made the news again, this time allegedly treating a 4-year-old girl like a terrorist when she gave her unscreened grandma a hug. Her mom has complained, but the TSA operates with our national security in mind. 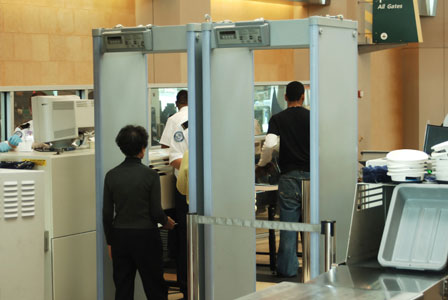 Who is right? Read on and decide for yourself.

Michelle Brademeyer, a mom from Montana, was traveling with her mother and two children when one of her kids caused a security problem at a Wichita, Kansas airport. With 9/11 a not-too-distant memory, how far is too far when it comes to our national security?

Michelle’s 4-year-old daughter, Isabella, passed through the detector just fine, but her grandmother set the alarm off and was asked to sit aside for further screening. Isabella, not really understanding what was going on, ran to give grandma a hug. This hug led to additional screening for Isabella (including a modified pat down) as she was considered a security threat.

Michelle claims that the TSA officers were concerned that a gun had been passed to the child during the hug, although a statement released by the TSA states otherwise. She also was unhappy with the fact that they refused to let her console her child, who was upset and crying, and the girl was treated harshly, even being yelled at by the officers.

Ultimately, they were allowed to board the plane after the screening was complete, although Michelle has filed a complaint with the TSA.

This toddler’s tantrum forces an airplane to turn around >>

Other parents felt that the TSA overstepped its boundaries, like Roger, another Facebook user. “Sure, this is a potential breach of security,” he explained. “Why not just run the kid through the metal detector again? Whatever you’re worried about it setting it off, if she passed it to the kid it will do so again. You’re not Jack Bauer, you’re an annoyance to most travelers and only a very minor speedbump to real terrorists. No reason to go around making people angry for kicks.”

Brenda, another user, felt the same. “I’d rather not fly then (sic) have their hands on my children,” she said.

Just how far should those in charge go to enforce our national security? Many people say the pat downs and other security measures enforced by the TSA are essential, even when it comes to children. “I am so tired of hearing about parents getting mad because their child had to go through security at the airport,” said Cassy, a user on KMBC 9’s Facebook page. “There are crazy people out there who would put things on their child just to sneak it through security.”

Jana, another user, wholeheartedly agreed. “I have several family members who are airline pilots,” she shared. “Whatever it takes to keep them safe, as well as the hundreds of passengers they fly around the country daily, is fine with me. If this mom knew what my family and I felt on 9/11, maybe she would think different.”

Learn how to avoid the top 5 airport security mistakes >>

User Julianna may have summed it up best. “I hate that searching children is what we’ve had to resort to for our safety,” she shared. “I feel horrible that the little girl had to be put through this as I’m sure TSA does too. However, the fact of the matter is there are adults who do hide dangerous stuff on their children. Search the children, but hold the adults accountable in every way.”

More on traveling with children