Actress and mom Jenna Elfman tweeted about the event she hosted with Kelly Preston and Laila Ali to promote the benefits of breastfeeding and toxin-free living in raising healthy children. 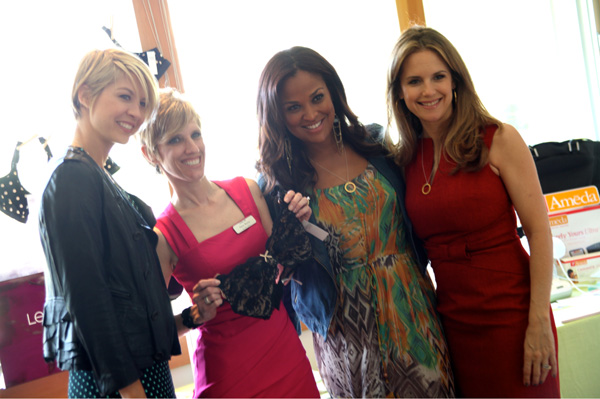 “Had most AMAZING [Best for Babes] and [Healthy Child] event at my house yesterday!” she tweeted. “THANK U 2 ALL WHO ATTENDED & GIGANTIC THANKS 2 ALL WHO HELPED!”

Check out more photos from the event >>

Elfman and her husband Bodhi Elfman are parents to two boys named Easton and Storey. She re-tweeted this cute thought from her husband: “I give him vanilla ice cream and then bring him home to @JennaElfman for dinner and bath. Dads have it easy.”

Actress and mom of three Demi Moore made her return to Twitter for the first time since her trip to rehab in January.

Her first tweet? “Testing,” she tweeted, with a link to a photo of her wearing glasses and lying on her bed.

“Time for a change, twitter name change… any suggestions?” she wrote, referring to her @MrsKutcher handle and her newly divorced status from her ex Ashton Kutcher.

“I think that one is taken!” she replied, followed by, “Collecting all the suggestions! Thank you. Keep them coming!!”

“Are you pregnant? When are u having a little one?” one Twitter follower asked LeAnn Rimes.

“We have our hands full with two lil boys 50% of the time right now and [work]. One day,” she replied.

By “two lil’ boys” she is referring to her husband’s two boys with his ex-wife Brandi Glanville. LeAnn refers to herself as the boys’ “bonus mom” instead of stepmom.

“I’ve never looked better than in this pic Jake drew of me,” LeAnn tweeted, with a link to this cute photo.

Also check out: 5 Things a step-parent should never do >> 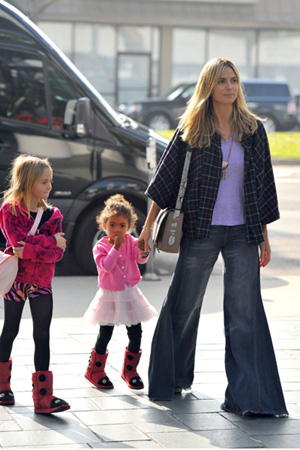 “Excited to show you all my Spring collection of maternity wear for A Pea in the Pod and Motherhood Maternity!” tweeted Heidi Klum, with a link to a video of The Do’s and Don’ts of Maternity Clothes.

She also tweeted a vintage photo of one of her early modeling shoots. “Wow! Check out this picture from 1992. One of my very first photo shoots. This is my original hair color!” she wrote, with a link to her photo.

“Annoying Mom Alert: If u are annoyed by this kind of stuff, turn away now. Look how cute this!” Leah Remini tweeted, with a link to a photo of her daughter’s essay, which talked about her love of animals.

“Glad you all liked my daughter’s essay, thank you,” tweeted Leah. “I am pretty proud of the person she is becoming. Thanks for your positive comments.”

“To all the fans concerned about Melissa & Joey will be affected by my baby bump. Don’t be!” tweeted Melissa Joan Hart, who just announced she is pregnant with her third child. “We finished Season 2 & start 3 after baby arrives!”

“Thanks to all of you for the love about my big news!” she continued. “P.S. don’t believe reports that say “confirmed” unless it’s from the source or a rep.”

Check out the “unconfirmed” baby bump of Drew Barrymore >>

“Just talked baby talk to baby KJ on the phone!!” tweeted Real Housewives of Atlanta’s Kim Zolciak, who is currently pregnant again. “2 days is the longest I have ever been away from him and for me its too da*n loooong!”

She also took to Twitter to clear up rumors. “I will be returning to RHOA sooo don’t believe the BS!!” she tweeted.