San Antonio mom Gina Walker, 31, miraculously survived the birth of her fifth child after a rare complication nearly took her life on the operating table. 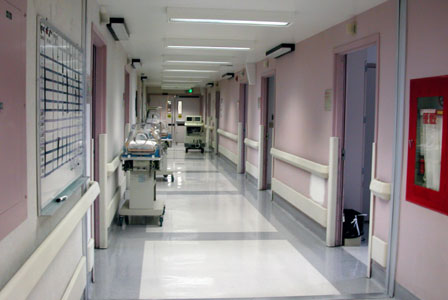 Walker was diagnosed with placenta percreta, where the placenta implants too far into the uterine wall and can, in extreme cases, grow into the bladder.

Gina Walker returned to the hospital this week to thank the doctors and medical staff who saved her life after she almost hemorrhaged to death on the operating table, according to The Associated Press. On Feb. 15, she arrived at the hospital for her planned cesarean section with an elected hysterectomy. Like most expecting moms, Gina thought she would heading home soon with a new baby in tow. As doctors said, the delivery went as planned, but then Gina started to hemorrhage. Doctors went through 30 units of blood in a flash and had to scramble for more.

The bleeding problem began to compound because Gina was losing clotting factor in the blood that was hemorrhaged.

“And for a brief period, we were able to get the hemorrhage under control enough to complete the operation we intended to do,” said Dr. Kevin Hall, chief of gynecological oncology at UT Medicine San Antonio. “And then, just as we were close to the completion of that operation, she started to bleed massively again.”

Gina ended up going through 540 units of type B and O blood — more than 35 gallons. Officials at the hospital’s blood bank said it was the most blood ever used for one person.

Gina remained in the hospital for a month, but went home with only minor complications. She’s had blurry vision in one eye. Not bad considering she likely could have suffered brain injury, stroke, paralysis or death.

The condition Gina was diagnosed with affects about 1 percent of pregnancies.

“Because of its propensity for severe hemorrhage, it is a potentially life-threatening condition,” according to an article in the medical journal Urology.

Placenta percreta is the most severe form of placenta accreta, involving unusually deep attachments in the wall of the uterus. It is often discovered at the time of birth but in some cases can be diagnosed beforehand by ultrasound. The definitive cause for this condition is unknown, but researchers believe it may be correlated with prior cesarean section operations. Treatments include leaving the placenta in the uterus after the baby is born and a planned C-section before the onset of labor. In very extreme cases of placenta percreta, a total hysterectomy is needed as well as removal of the bladder.

Home birth or hospital?
How to handle an unexpected birth at home
Child birth classes: should you take one?