Can you imagine packing up your family and moving abroad? The thought may very well give you a slight panic attack or it may induce a little spark of curiosity. Either way, Families Around the World gives you a peek at American families living abroad — from far off exotic places such as Abu Dhabi in the Middle East to the bustling metropolis of Rome and everywhere in between. Stay tuned for a look at what life is like raising a family away from home.

Can you imagine packing up your family and moving abroad? The thought may very well give you a slight panic attack or it may induce a little spark of curiosity. Either way, Families Around the World gives you a peek at American families living abroad — from far off exotic places such as Abu Dhabi in the Middle East to the bustling metropolis of Rome and everywhere in between. Stay tuned for a look at what life is like raising a family away from home. 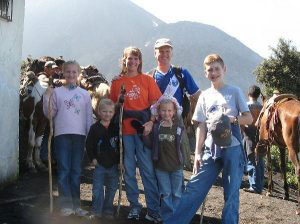 Picture this: You’re given the chance to take a six-month sabbatical for work and have decided to use it as a chance to move abroad with your family. Where would you choose to go?

The Barwells, a family of six from Seattle, used this rare, once-in-a-lifetime opportunity to move to Guatemala, a Central American country nestled between Belize, Mexico and Honduras. Of all places, why Guatemala? Denise Daniels Barwell tells us they knew they wanted to spend the six months in a Spanish-speaking area — despite not being able to speak the language themselves — as well as be in a developing country where they could teach their children, Josh, Samara, Danica and Zachary, to respect the amazing opportunities and wealth they have, in comparison to the rest of the world.

And after six months of being completely immersed in Guatemalan culture, schools and daily life, that’s not all the Barwell family learned through this incredible experience.

Families around the world: Life in Paris >>

“In our first few days, we were [in awe of] the security guards wandering around with very large guns, the wild dogs roving around the city (and with nobody picking up after them), the very colorful houses and markets, the immensely friendly people we encountered everywhere and a hugely different diet,” Denise tell us.

The Barwell family happened to arrive in Antigua on New Year’s Eve, which means they spent their night being greeted by a three-hour long fireworks display that lasted until 2:30 a.m!

Many moms who we’ve talked to for the Families Around the World series have reflected that daily life abroad is oddly similar to what their life was like at home, but there is no doubt life in Guatemala was taken at a slower pace for the Barwell family. 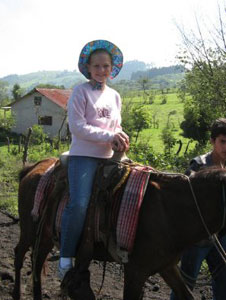 All four children attended school every day — the older kids would leave at 6:30 a.m. via a 12-seat passenger van, sans seatbelts,  typically packed with 20 children — and Zach left for preschool a couple of hours later. While the kids were at school, Denise and Craig would spend their mornings exploring Antigua or relaxing with some reading and a cup of coffee before meeting back together as a family around 1 p.m.

A typical afternoon for the Barwell family while living in Guatemala started with tutoring — both for language and for homework for the children, which was done completely in Spanish — followed by trips to the market, adventures checking out new or favorite parts of the city or playing with friends inside the gated, walled courtyard of their house.

Denise remarks, “Without ballet, soccer, swimming and chess club, we had much more time together as a family. Because most of the Guatemalan kids we knew weren’t involved in the many hectic activities of our kids’ American peers, we never felt like we were missing out on something.”

Families around the world: Life in Rome >>

Before they left Guatemala, each family member wrote a list on their family blog of what they would miss most and what they’ll miss least about living in Guatemala. From the “will miss it” list is the friendliness of strangers, soccer and not having to wear seatbelts in the car. And from the “won’t miss it one bit” list, the poop on the streets makes the list of every single family member, along with mosquitos and riding the very full bus to school every morning.

Also on their family blog, Denise writes about their re-entry to their life in Seattle upon returning from Guatemala. She is amazed at how quickly they leaped right back into their old routines — running from birthday parties to swim lessons to shopping trips without batting an eye. “Did we really step off the plane and onto this treadmill already?” She reflects, “Have we learned nothing from our six-month sabbatical?”

However, she also tells us the time they spent together in Guatemala was irreplaceable, commenting that having to rely on each other more than they typically do at home and spending so much time together was healthy for every family member.

More on families around the world