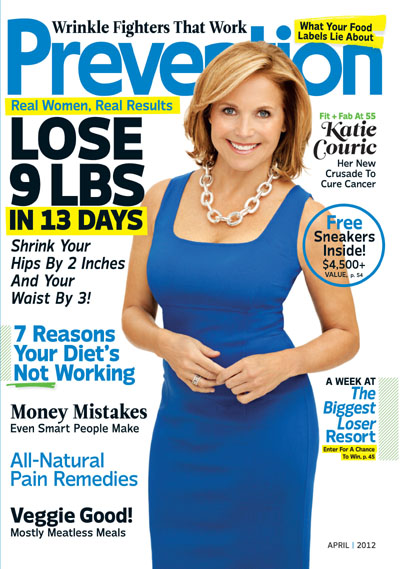 Katie Couric opened up to Prevention magazine about the death of her husband, Jay Monahan, from colon cancer in 1998 when he was 42.

“I never acknowledged that I had given up hope,” she said of Jay’s illness. “Sometimes, I wish I had spoken with him about what we knew was inevitable. I really never had an opportunity to say goodbye to Jay because I thought that accepting the fact that he was going to die — whether it was too painful or… I don’t know. I wish I had been more honest. I was trying to protect him. Maybe I was trying to protect me. But for whatever reason, we never really acknowledged what we both knew to be true: that he was going to die. It was left unspoken, and as a result, a lot of things weren’t said that I wish had been.”

What lessons does she want to teach her daughters, Ellie, a junior at Yale, and Carrie, in 10th grade? “I try to set a good example in terms of dealing with failure or setbacks. I think one of the problems is a lot of parents — myself included — don’t allow their kids to fail. Overparenting does a disservice because we’re not allowing kids to develop coping skills when they don’t get perfect grades or win school elections. It’s something that I think about.”