A 2012 Brigham Young University study found that 71% of mothers weren’t doing what they wanted to do regarding working full or part-time or staying at home, and among those moms, postpartum depression rates were higher. 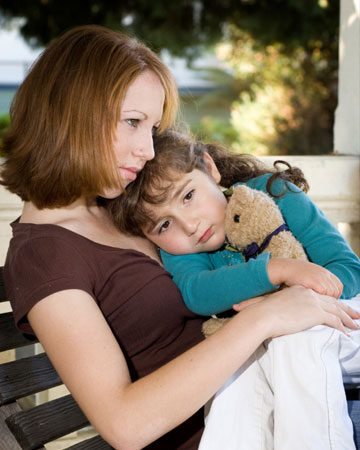 A 2012 Brigham Young University study found 71 percent of mothers weren’t doing what they wanted to do regarding working full time, part time or staying at home, and among those moms, postpartum depression rates were higher.

I’ve been saying it for years, and it’s one of my mom mantras: Mom’s happiness matters, not just a little bit, not less than her children’s — it matters just as much.

In the decade and a half since I had my daughter, I’ve seen an enormous shift in attitudes toward expectations about mothers. We’ve been relentlessly speaking our truths through books, blogs, articles and the media. Finally, we’re shedding at least some of our oppressive mom guilt (despite society still heaping it on), and we’re being, quite frankly — painfully honest.

How to handle parenting peer pressure >>

Unlike the 1980s when mothers tried to be all things to all people, full-time effective employee and full-time devoted mother, more moms today recognize the “village” — parents, employers and society have to work together so mothers aren’t always split into pieces and then criticized for not doing well enough.

And, it helps our message — that mom’s well-being and happiness are integral to the emotional health of the entire family — when the academic community backs up feelings we’ve long known in our gut.

Mothers doing opposite of what they want and depression

Brigham-Young researchers found that when mothers do the opposite of what they want to do in terms of work choices — stay at home or return to work, they’re more likely to get depressed.

Twenty-five percent of mothers who did the opposite of what they wanted had clinical depression, while only 14 percent who were happy with their decision to work or stay home were depressed.

A mom’s experience with work-home ambivalence

When I decided to leave the workforce to be at home with my daughter, I did it out of equal parts guilt and desire to be at home. Once the initial at-home “honeymoon” was over, however, I started to get depressed.

Months before, when my daughter was six weeks, I experienced severe postpartum depression, caused by a massive shift in my hormones and brain neurotransmitters. But long after my biochemistry was at least (more) balanced, I still wasn’t a totally happy camper.

I was deeply in love and grateful for my daughter for the choice to be at home, but I wasn’t so in love with the transition to full time at home, despite the fact I did everything on the “Stay at home mother survival checklist” — the implied wisdom seasoned moms passed on:

Check. I joined Moms Club when my daughter was 2 months old and co-founded the Orlando Mothers & More chapter when she was 4.

Check. I regularly found reliable family, friends and babysitters to watch my daughter and went out at least once a month.

Get help with child care

Check. My spouse was a co-parent from the get-go and besides breastfeeding — that would have been interesting — he did it all.

Take time for yourself

Check. I made time to get an occasional massage, read a book, take a bubble bath, see friends.

Depression in mothers has numerous underlying causes, and leaving the workforce or returning can be overlooked factors. For me, a biochemical imbalance and leaving my old identity and career added to my low-level simmering depression, a depression that was under the radar for the most part, but always around.

Until I listened to my own instincts instead of my peers, until my daughter went to school full time, until I started a writing career and balanced my mind and body, I wasn’t totally content.

Our kids notice when we’re unhappy. Unhappiness can turn into depression, which left unchecked, can spread like a virus throughout the entire family. Finding your pathway at home or at work may be the exact medicine you need to turn the corner.

More on mothers and depression