You may have noticed babies wearing teething necklaces made of amber. What are they all about? Are they safe? Do they work? We answer these questions and more about these baby accessories that are becoming quite trendy, and the claims they soothe teething pain in a natural way. 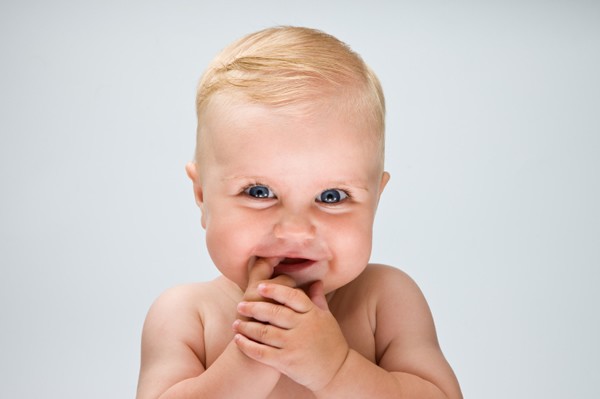 Amber necklaces, also known as teething necklaces, are appearing on the necks of babies of all ages, from newborn on up. Claiming to soothe pain caused by teething, parents trying these before resorting to traditional painkillers, such as a topical numbing agent, acetaminophen or ibuprofen.

These necklaces are not used in a manner you may expect. Instead of the baby chewing on them, as they would a teething toy, the necklace is worn against the skin, short enough to not be able to reach over the baby’s chin. The warmth of the baby’s body is claimed to release succinic acid from the amber, which is then absorbed by your baby for an analgesic effect.

Generally, parents are advised to not place anything around their infant’s neck due to strangulation risks. Charlene, mother of two, has this concern. “I wouldn’t put anything around my kids’ necks, ankles or wrists, especially while they’re sleeping,” she shared.

Also, you have to consider the danger if the necklace breaks and beads fall off. Many brands will knot the thread in between each bead to minimize the potential of beads all over the floor, but a broken necklace, even with all beads intact, is still a choking hazard for a small child.

Parents can keep their baby safer with constant supervision and taking the necklace off while their little one is sleeping — many will wrap it around an ankle, under a sleeper. 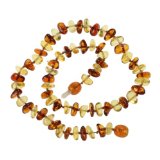 There have been no scientific studies on the claims the necklaces actually relieve pain. Amber, which is fossilized tree resin and which has been around for millions of years, is a very hard substance, and it can be hard to imagine it would give up its precious commodities when against something as mild as a baby’s skin.

“I think they are pretty, but that’s it,” said Angela, mom of one. “The melting point of succinic acid is 365 degrees F. If your kid is getting hot enough to release the good stuff, you need a firefighter, not a necklace!”

Many parents, however, use the necklaces and swear by them. “I never noticed a difference until Bubba’s broke,” said Amy from Nebraska. “He was super cranky with teeth. Guess what? He was calm within an hour of putting it on.” Aubrey from Missouri had similar sentiments. “We love our necklace,” she explained. “It was amazing the difference in Michael when he got his molars, and we put the necklace on.”

Rebecca from Oregon became a believer after trying it herself. “I was skeptical at first because initially, I thought of amber more like a rock rather than an oil or sap, so I didn’t really believe that you could absorb any of its properties through your skin,” she told us. “However, I started wearing one, and instantly started sleeping better.”

No matter how you feel, you can’t deny these necklaces are super cute. If you choose to use amber with your little one, be sure to check the necklace for weakness, watch them carefully and retire it when your little one can take the necklace off or tries to eat it.

How to soothe teething pain
Breastfeeding and teething and biting
Are baby teeth important?

22 hrs ago
by Raven Snook

22 hrs ago
by Eugenia Miranda Richman