So you’ve fallen hard for a man with kids, and you think he might pop the question. 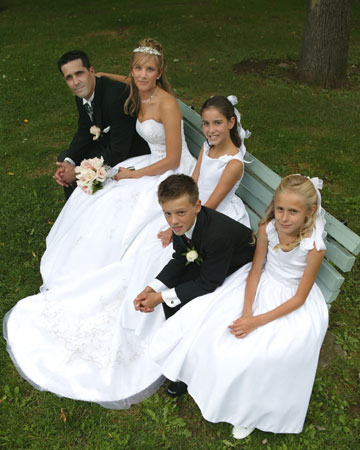 You love the children, and you feel ready, but there are still a lot of unanswered questions about what it will be like to actually walk in the shoes of a step-parent and how to be a stepmother. Read on for what you need to know and discuss with your single dad before you say, “I do.”

What will your role be?

Do you and your partner have the same idea of what your role in his children’s lives will be after you’re married? It’s important to discuss not only how you see yourself as a stepmom but also how he views you as a step-parent. You could find you are on two completely different pages when it comes to what your role should be in his children’s lives. Communicating about it now will save you a lot of problems in the future.

Related story Soon-to-be Stepmom Refuses to Call Little Girl by a Name Her Dad Prefers — Is She Wrong?

What you need to know about raising stepchildren >>

Have you discussed his relationship with his ex-wife in any great detail? It’s possible that up until now, he’s given you the CliffsNotes or even the candy-coated version. But if you’re considering becoming a part of his family, it’s important he is honest about you — about the good and the bad. If it turns out he and his ex-wife have a rocky relationship, it doesn’t have to be a deal breaker. They obviously got divorced for a reason. But because she will likely play a large role in his life for a while, his relationship with her is important. Not just to him but also to his children.

What will your relationship be like with his ex?

Hopefully, your answer to that question is positive. Because no matter what, you will need to work hard at your relationship with her. She is the mother of the children, and her role needs to be respected. You may not always see eye-to-eye, and that’s OK. Your relationship with the kids’ mom is one that’s going to take time to cultivate. In the beginning, it won’t be unusual if it’s harder than you expected. But over time, if you remember to always put the kids’ needs first, it should improve.

What do the kids want?

This is a great question. And if only there was a clear-cut answer. Most likely, they will have no idea exactly what they want. That’s OK. There’s no way to predict how the children will react to the news their dad is marrying another woman. Even if up until now you’ve had a fantastic relationship with them, the fact that their dad is marrying someone other than their mom can still bring up a range of emotions — many of which will be hard for them to handle.

What are your expectations?

Whatever they are, lower them. Even if you think it’s going to be easy, and you’re bound and determined to make it easy, it’s still going to be hard. And the stress of the transition can put a strain on your relationship with your partner. If you discuss this early, you can come up with some ways to manage everyone’s feelings once you decide to get married.

Things a step-parent should never do >>

Stepmom 101: 5 Tips for stepmoms in transition
Stepmom 911: 5 Common issues solved
How to smoothly transition into step-parenting

10 hrs ago
by Debbie Feit