Vehicles are dangerous, plain and simple. 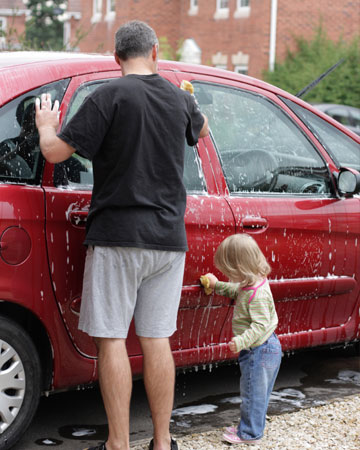 The two-plus tons of steel and other materials we rely on to drop our kids off at school or shuttle them to ballet and soccer can also kill them. While some accidents are unavoidable, we can prevent others — like backovers. Learn more about vehicle safety and the steps you can take to protect your kids.

Whether you drive a minivan, an SUV, a sedan or an eco-friendly hybrid, your vehicle is an integral part of your life. You take your kids to school, drive yourself to work and run errands in your car. In fact, some people spend hours a day driving.

And while parents put a great amount of effort into keeping their kids safe, sometimes the most glaring of dangers escape us. We carefully research car seats and booster seats and buy the best we can afford, but how much thought have you put into car accidents where a car or booster seat is entirely useless?

Car accidents of a different type

KidsAndCars.org, a nonprofit group that works to improve child safety around cars, shares the following on its website: “Every year at least 1,747 people are killed and another 841,000 are injured in nontraffic incidents according to the Not-in-Traffic Surveillance (NiTS) 2007 report. ‘Nontraffic’ meaning anything that happens off of public roads or highways, generally in parking lots or driveways.”

In November, reality TV mom Kate Gosselin caught serious flack for her parenting skills when the paparazzi snapped photos of one of her sons climbing around under her minivan as she sat inside in the school parking lot. In fact, one photo showed her son’s head directly behind the vehicle’s front right wheel.

“A minivan is a 3,000-pound lethal weapon and having children crawling around it is not prudent,” Jannette Fennell, president and founder of KidsAndCars.org told Radar Online at the time of the incident. “You should never leave children unattended in or around motor vehicles. Even if they are all capable of getting themselves into the van and getting buckled up, children at that age are unpredictable.”

Vehicles present several dangers when they’re off the roadway (e.g., in parking lots and driveways), but perhaps one of the most compelling is backovers. Shortly after I became a mom, I heard about a tragedy that struck a family in a neighborhood a few miles from our own. The family had returned from a fun weekend on the lake and was outside washing their boat in the driveway. When the father backed up the family’s large vehicle, he had no idea his toddler was directly behind it. The accident was fatal, and just like that, nobody in the family was ever the same again.

According to KidsAndCars.org, 50 children are backed over every single week. Two of these children die each week and in 70 percent of the cases, a friend or family member is behind the wheel.

Quick Tips from Kids And Cars:

Education is extremely important. Teach your children cars are not toys, and they should never play near or especially behind or under a vehicle. In Gosselin’s case, not only should she have already had that discussion with her son, she should have been aware of his whereabouts when he exited the family van.

However, the fact is the majority of backover victims are 1-year-old children, according to KidsAndCars.org. 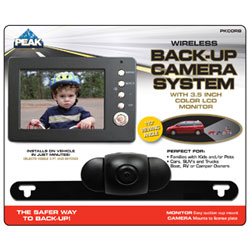 Many vehicles come equipped with backup sensors, a backup camera or both. However, if your vehicle is lacking a backup camera, you can purchase and install a reasonably priced one on your own. A backup camera will give you visibility where you previously had none. You’ll know — simply by looking on a screen — whether a child is behind your vehicle. While that might seem unnecessary, remember that 2,400 children are backed over every year.

Backup cameras are inexpensive and easy to install. PEAK Automotive products offers backup cameras that can be installed on any vehicle model — and cost as little as $99. That’s not much for both peace of mind and the safety of your kids. This particular company offers a few options at different price points: One is a rearview mirror with a built in monitor that fits over your existing mirror and another is an LCD monitor with a GPS unit that can be attached to the windshield.

Backover accidents received a lot of attention a few years ago when Christian singer Steven Curtis Chapman’s older son backed over Chapman’s 5-year-old daughter, a tragic accident that took the child’s life. Since then, it seems that there’s less attention on backovers.

And then last month, The New York Times reported that the Department of Transportation was expected to announce a new rule requiring all vehicle manufacturers to make backup cameras standard beginning in 2014.

Unfortunately, the DOT told Congress it was delaying a ruling until December 2012 (via CE Outlook). Until backup cameras come standard in all vehicles, consider installing an aftermarket backup camera. Think of it this way: A piece of technology that costs less than a hundred bucks could save your child’s life.

Child safety locks: When should you disable?
Top 10 car seat safety tips
When can kids move to the front seat?