Can you imagine packing up your family and moving abroad? The thought may very well give you a slight panic attack or it may induce a little spark of curiosity. Either way, Families Around the World gives you a sneak peek at American families living abroad — from far off exotic places such as Abu Dhabi in the Middle East to the bustling metropolis of Rome and everywhere in between. Stay tuned for a look at what life is like raising a family away from home.

Can you imagine packing up your family and moving abroad? The thought may very well give you a slight panic attack or it may induce a little spark of curiosity. Either way, Families Around the World gives you a sneak peek at American families living abroad — from far off exotic places such as Abu Dhabi in the Middle East to the bustling metropolis of Rome and everywhere in between. Stay tuned for a look at what life is like raising a family away from home. 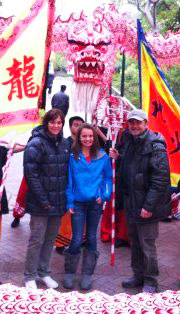 It’s more than 6,000 miles away with a 15-hour time difference between Seattle and Hong Kong, where the Miska family — Steve, Kim and Molly (age 12) — have been living for the past few months. But despite the differences in time and location, they are learning to make a life for themselves in this new city.

The Miskas moved from Seattle to Hong Kong early this year, where Steve is president and creative director of a Chinese-based apparel company. Kim worked as a real estate broker in Seattle before leaving on this adventure, and daughter, Molly, is attending an international school, where she is one of only two American students in her grade of more than 60 children (the majority of students are from surrounding Asian countries such as India, Japan and the Philippines).

They are learning to love their new home — in a 700-square-foot apartment with one tiny bathroom — and the gorgeous surroundings, adventures on the weekends around Hong Kong and establishing a new normal as a family living abroad.

The Miska family happened to arrive in Hong Kong on the first day of the Chinese New Year, kicking off the Year of the Dragon, making it quite a celebration for their first week! Kim says the entire city was buzzing with excitement. The family spent their second night in Hong Kong watching a fireworks display over Victoria Harbour that was 27 minutes of grand-finale-style fireworks.

In addition, Kim and Molly were able to participate in a tradition they will always remember — during the Chinese New Year, companies handout lai see or “lucky money” to their employees. The staff members of the company (Steve works for a Chinese company, unlike most Americans living in China who work for American companies based in China) walk around to the executives’ offices and are given red envelopes (red for good luck) that are filled with different amounts of money. By the end of the day, depending on their position in the company, most employees will have collected between $100-$300. Molly and Kim were given the opportunity to hand out this lucky money and even collect lai see themselves.

As most families from the Families Around the World series, Kim says daily life in Hong Kong isn’t a far cry from what life was like at home in the U.S., despite a few details here and there. Their day starts early in Hong Kong — Molly is up by 5:40 a.m. to take the bus to school. But this isn’t your average school bus. Molly, like all children who are older than age 10 in Hong Kong, takes public transportation to and from school, by herself.

Kim puts her on the bus outside of their building, where Molly rides 20 minutes to school. After school, Molly takes a similar bus back, and on days she has track, she doesn’t arrive home until nearly 7 p.m. “This took some serious getting used to,” Kim tells us. “It’s really hard to envision your child out there alone on a public bus in a city of seven million people.” 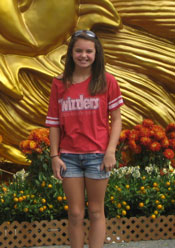 Families around the world: Life in Tokyo >>

Living in abroad… with a teenager

When it comes to being a mom in this experience — and to the mom of a 12-year old daughter, at that — Kim says she discovered patience she didn’t know she had. In addition, the sometimes cliche phrase of “give and take” has developed a very real life meaning for the Miska family. “We all had to give up things back home that were equally important to embark on this journey. [But] in the end, it doesn’t matter where we live, as long as we’re together.”

The majority of Americans living in Hong Kong live on Hong Kong Island.

Between the smell of the sewer and the smell of fish, it can take a while for your nose to get adjusted in Hong Kong!

More on families around the world

Life in Paris
Life in Abu Dhabi
Life in Rome