You know her best as Kelly Taylor from Beverly Hills, 90210, but Jennie Garth is also a newly single mom of three daughters — Luca, 14; Lola, 9; and Fiona, 5 — and going through a transitional time in her life. 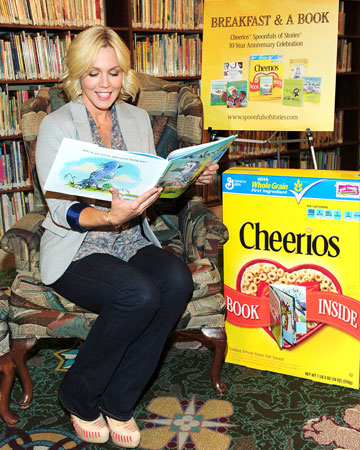 Garth took time out from her hectic schedule to talk to SheKnows about the Cheerios Spoonfuls of Stories program, her new TV show and being a single parent. 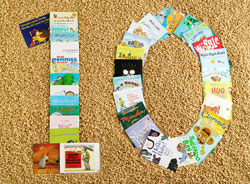 The Cheerios Spoonfuls of Stories program helps get books into kids’ hands and encourages families to read together. Since 2002, Cheerios has given away more than 60 million books in boxes and donated $3.8 million to First Book, an award-winning children’s literacy nonprofit that provides the opportunity for children from low-income families to own their first new books.

“I’m partnering with Cheerios and Spoonfuls of Stories again this year to talk about the importance of reading with your kids and making people aware that through March and April, Cheerios is giving away books in their cereal boxes,” says Garth. “This is the 10-year anniversary of the program, and Cheerios is holding “Breakfast & A Book” events around the country featuring special guest readers to raise awareness about the importance of literacy in our children and to also raise money for the First Book organization.”

“Cheerios Spoonfuls of Stories is a fabulous program that’s giving away a million books to kids that normally wouldn’t have the opportunity to get them,” Garth explains. “They have given over 60 million books in the last 10 years while they promote literacy in our children.”

The importance of family reading time

Reading is important from the time children are born. Reading to your kids promotes parental bonding, encourages speech and communication skills, enhances concentration and discipline and of course, lays the foundation for reading on their own in the future.

“Fiona, my 5-year-old, is just starting to read, and the experience is so amazing,” says Garth. “My other two daughters were 6 and 7 when they began to read, and Fiona is starting a little early. She loves it so much that she’s constantly excited about reading. Even when I am too tired, she always says, ‘No, it’s time to read,’ and grabs her Dick and Jane books. It’s cute how much she loves it.”

“I think it’s so important, and it’s part of our jobs as parents to foster that love for reading in our kids. All of my girls love reading. My oldest, Luca, likes a variety of books. She did enjoy The Hunger Games but also reads classics. My daughter just read Pride and Prejudice for a project for school. At home, it’s so nice to turn off the TV and have that quiet time as a family and all read.”

Despite being in the limelight since she was a teen, Garth is down to earth and enjoys simple family time with her daughters — from reading to playing outdoors.

“One of our favorite things to do together is have a picnic on a blanket in the yard. From that blanket many things can happen — running and playing, jumping on the trampoline, playing with the dogs or the horses. It’s just a great place to spend time together.”

You’ll see Garth next in Jennie Garth: A Little Bit Country — her new series that premieres April 20 at 9 p.m. on CMT. The show centers on Garth as she leaves Hollywood behind in search of a simpler life for her family on a seven-acre farm in Los Olivos, California.

“I lived on a farm in that idyllic environment [Garth spent her childhood on a ranch in Illinois] and wanted that for my girls,” she explains. “I wanted the chance to have a job and be creating an income while being in the country. This show gives me that.”

“I also think of it as an opportunity to invite people in and see another side of me. I’m looking forward to opening up to people — especially women and sharing my story with them.”

“I face the same challenges as any single mom. It’s not easy,” Garth says.

“I can relate to any other woman going through the same thing. That’s what I really want to show with the TV series: Whether you are famous or not, it doesn’t really matter.”

“I want to identify and connect with women everywhere. There’s a stigma with being a celebrity and how we’re perceived as so much different or better. But when you are going through something like I’m going through — we are all the same. The feelings and challenges are the same, no matter who you are.”