On the AMC hit television show Mad Men, January Jones’s character Betty is not the kind of woman or mother any of us aspire to be. She’s cold, standoffish and often angry. But in real life, Jones is successfully juggling a career as an award-winning actress (the season five premiere of Mad Men is Sunday) and a single mom to Xander, 6 months. 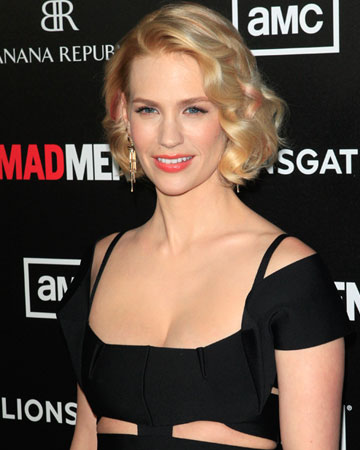 She serves as a reminder of how much credit all single moms deserve. Read on for more about January Jones’s busy life as a single mom.

Any fan of Mad Men has her calendar marked for Sunday, March 25. After a 17-month hiatus, the Emmy-award winning AMC drama is finally returning to television with a two-hour premiere. One of the program’s most controversial and often hated characters, Betty Francis, is played by Emmy-nominated actress January Jones. Jones’s character is a divorced mother of three, though she recently remarried.

In real life, Jones is a single mother to 6-month-old son Xander. She bears no resemblance to the type of mother she plays on the show — cold, harsh and often mean. Henry Francis, her husband, has said of Betty as a mother, “Her children are often terrified of her.” Of her own character, Jones told E! Online, “Everybody liked Betty when she was like in a living hell in season one and two, and now they hate her.” Adding: “I think as an audience member you can empathize with her struggling to find happiness — I think it’s an ongoing process.”

“I think it’s funny that it carries over into my life, my actual life, when [showrunner] Matt [Weiner] writes a storyline that Betty’s unlikable, all of a sudden everybody hates me. I hope she gets a little more well received.”

Being a single mom is hard work 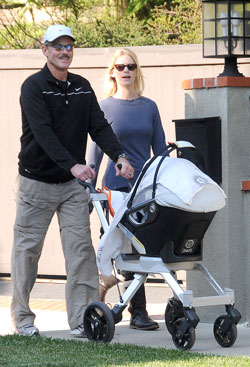 Still mum on who the father of her baby is, Jones isn’t afraid to admit that being a single mom is hard work. “I was back when the baby was only 6 or 7 weeks old so it was difficult,” the actress, 34, told Us Weekly about her return to the set at Mad Men‘s season five premiere in Hollywood, also her son’s birthday. “It was difficult to be a working mom and just juggling all of that. But everyone made it work, and it was great.”

According to Jones, the team at Mad Men was very accommodating in allowing her to bring Xander to the set. “They made it baby friendly for me because I’m the first female on set to have a baby so I got to bring him,” she shared. “He had his own room, and I was able to work around it because I was nursing.”

So how did Xander celebrate his six-month birthday? The actress told Access Hollywood, “He’s in bed already. We didn’t celebrate it. He doesn’t know. I mean, he got some cauliflower with his carrots.”

Jones has said she “adores” motherhood and has received praise from co-star and Mad Men ex-husband, Jon Hamm, who told USA Today, “January is learning a lot about what it’s all about, and God bless her, man. She had a baby, and he’s a cute baby. She’s doing it by herself. And you just go, ‘Good for you.’ She’s a great gal. I wish her the best of luck there.”

Hamm went on to say, “I know from being raised by a single mom how hard it is. She’s got a great family: mom and dad and two sisters. I was over there — she lives a block away from me — I was over there relatively soon after she had the kid, and I was watching grandma and grandpa and her two sisters and it was all going on,” he says.

How to balance life as a single parent >>

24 hrs ago
by Emilia Mense Caby