Angela Hanratty of Staten Island, New York, juggles her accountant job with raising her two kids with autism. Motherhood has brought her both joy and a tolerance for those who can’t help themselves. 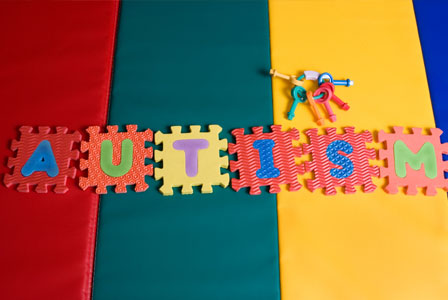 At 9 months, my son Raymond wasn’t looking at me or babbling. By 14 months, we had him evaluated and learned he had a development disorder. By age 5, he was diagnosed with autism.

By Angela Hanratty
As told to Julie Weingarden Dubin

Today, Raymond is 11, and our daughter Melanie, almost 9, also has autism. I didn’t really know what autism was. Now I don’t know any different. 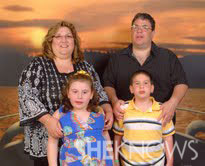 I’m an accountant and work four days a week. The kids go to a public school in Staten Island for kids with special needs. My husband, a retired sanitation worker, watches them after school.

Raymond speaks in short sentences and can say, “I want juice,” or, “I want to watch TV.” He talks very mechanically, but I’ll take it because he can tell me what he wants. Melanie is nonverbal. The kids aren’t potty trained, which is a huge challenge for us.

Raymond’s easygoing and Melanie’s more aggressive — she’s determined to do what she wants to do. Both kids love playing outside, swimming, coloring and watching Sesame Street.

We recently applied for and got a home health aide who comes six days a week from 3 – 7 p.m. to help the kids, and it’s changed our lives.

Raymond is very loving and affectionate and wants to cuddle all the time. Melanie wouldn’t let me hold her for her first few years, and I had to just let her be. I felt sad having a child so withdrawn, but fortunately, she came around. When she turned 5, she started letting me hold her, and now, she comes to us with hugs and kisses.

Melanie’s more connected to me. If she sees me around the house and knows I’m there, she’s fine and independent. But if I’m leaving for the store, she starts crying and holding my leg.

Melanie knows a lot more than I give her credit for. She’ll hear me talking about something, and I’ll assume she doesn’t understand, but then she’ll bring over exactly what I’m talking about.

We’re trying to work on electronic type of speaking with the iPad, where she taps pictures and symbols and the iPad talks. But sometimes it’s just easier for me if she pulls me over to show me what she wants. We try not to frustrate her because she pinches and bites herself when she gets frustrated or angry.

Children with autism are impulsive. They have no idea what’s acceptable and what isn’t. Recently, we were at a restaurant and Melanie was having a meltdown while we were waiting in a long line. People kept looking at her like, “What’s wrong with her?” People are quick to judge my kid as being a brat or bad, but they don’t know where we’re coming from.

I’ll be in a store and my daughter will take off and try to run out. I’ll yell for someone to stop her so she doesn’t run into the street, and people just look at me. But a parent who has a child with autism totally gets it and will stop my kid in a heartbeat.

If people see someone with a child with autism having a hard time, I wish they would offer their support.

I love being a mom, and I just want my kids to be happy. I’ve learned to live differently and make the best of what I have because my kids are my world.

More about parenting and autism

10 hrs ago
by Kimberly Dawn Neumann