What were Hollywood moms tweeting about this week? Leah Remini has been active on Twitter this week, in between fighting with Sharon Osbourne and writing about her daughter wanting to go to church. Brooke Burke is gearing up for Dancing with the Stars, while Jessica Alba is sharing adorable pictures of Honor and Haven. And finally, sorry PBS, Jenny McCarthy tweeted she is not a fan of the “annoying” kids TV show Caillou. 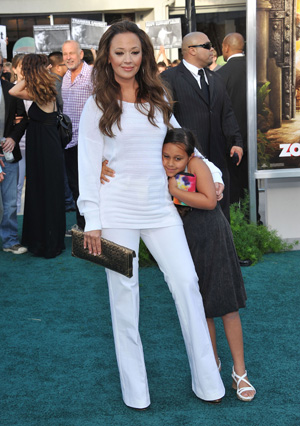 Leah Remini has been causing some serious waves on Twitter this week, writing that she and Holly Robinson Peete were fired from The Talk because Sharon Osbourne wanted them off the show.

“Sharon thought me and Holly were ghetto,” Remini tweeted. “We were not funny, awkward and didn’t know ourselves. She has the power that was given to her.”

Also on her mind?

“My kid wanted [to] watch Big Mamma’s House [and] now she wants me [to] take her to a Baptist Church,” she tweeted, about her 6-year-old daughter Sofia.

“Does your daughter want to sing gospel songs too?” one follower tweeted back to Leah. “She sounds cute.”

It sounds like Jenny McCarthy doesn’t let her son watch the kids TV show Caillou — at least not when she is in the house!

“Do any other moms want to punch Caillou in the face? He’s so annoying,” she tweeted.

Jenny is also in the Dominican Republic filming Love in the Wild season 2 — and let’s just say it has gone to the dogs!

“There are thousands of stray dogs on this island. Sarah McLachlan would sh*t an eggroll,” she wrote, referring to the singer’s work with the Humane Society.

Alicia Silverstone is a huge advocate of a vegan diet and even wrote a book about it called The Kind Diet.

“Carol heals her baby’s eczema by adopting a kind diet!” Alicia wrote, linking to a story about a mom who used her diet tips to help her baby.

“Today is one of the best days of my life. The day my oldest daughter Neriah was born,” tweeted Brook Burke. “Happy 12th birthday baby! I looooove you”

Burke is also gearing up for the season premiere of the new season of Dancing with the Stars, which she hosts. “I’m ready to Jam all week. I gained 5 lbs. 1 week to get ready for #DWTS,” she tweeted. “Let’s sweat, dance, laugh, & enjoy! I missed u guys” 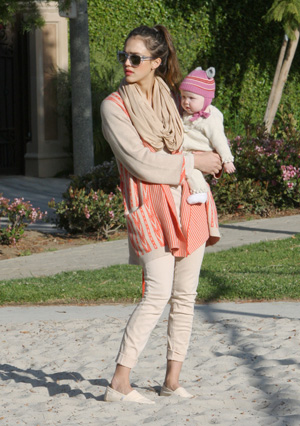 “Remember the ice cream trucks when we were kids? They haven’t changed!,” tweeted Jessica Alba, with a link to her daughter Honor in front of an ice cream truck.

She couldn’t leave her baby daughter Haven out of the fun. “Someone’s super proud of her mess!” she wrote, linking to this photo of her baby covered in food.

Maternity clothes designer Liz Lange reached out to her Twitter followers to help with her daughters braces. “My daughter’s new braces are KILLING her (she claims the wax, tylenol and anbesol) not doing enough,” she tweeted. “Any other ideas?”

Cougar Town actress Busy Phillips wasn’t a fan of springing forward for daylight saving time — and apparently neither was her daughter Birdie.

“You know what, daylight savings? We’re done. I just can’t take your sh*t anymore. And now you’re messing with my KID’S HEAD?? It’s SO OVER.”