Is your teen super sleepy? A 2010 study found that the amount and timing of morning light may be affecting your child’s natural nighttime sleep cycle. 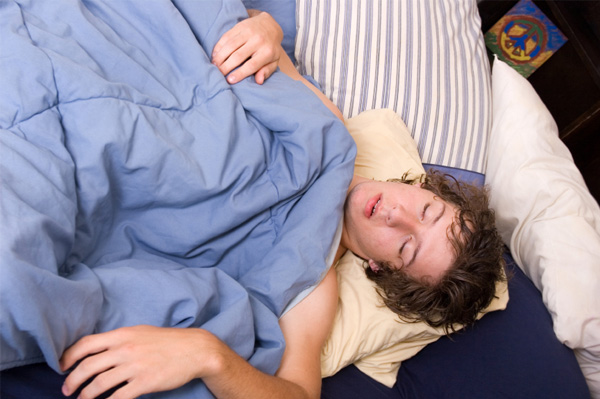 Teens today have almost become cave dwellers, spending less time outside than ever before, and as a result, many have a hard time falling asleep at night.

“These morning-light-deprived teenagers are going to bed later, getting less sleep and possibly under-performing on standardized tests. We are starting to call this the ‘teenage night owl syndrome,'” says Mariana Figueiro, Ph.D., in a Feb. 16, 2010, press release for her study.

Delayed melatonin production could be due to teens playing computer games or watching television long into the wee hours. Both activities expose teens to bright light, which tells the brain to hold off on releasing melatonin.

The hormonal flux of puberty, which postpones the body’s nightly release of the sleep hormone, could also be a factor. While teens sleep, their bodies release a critical hormone involved in growth spurts. As a result, they need more slumber than children and adults — yet they often get less.

The timing and exposure to colors across the light spectrum can affect sleep patterns. As a result, because high-schoolers usually go to school while it’s still dark out, this cycle disrupts their circadian rhythm — the Earth’s natural 24-hour light/dark cycle, explains Dr. Figueiro.

In Figueiro’s study, researchers found that eighth-graders who wore special glasses to prevent short-wavelength (blue) morning light from reaching their eyes experienced a 30-minute delay in sleep onset by the end of the five-day study. “If you remove blue light in the morning, it delays the onset of melatonin, the hormone that indicates to the body when it’s nighttime,” explains Dr. Figueiro. “Our study shows melatonin onset was delayed by about six minutes each day the teens were restricted from blue light. Sleep onset typically occurs about two hours after melatonin onset.”

While adults generally produce melatonin around 10 p.m., teenagers, according to a study cited in an online British Broadcasting Corporation (“Late Nights and Laziness.” British Broadcasting Corporation Online. Accessed May 6, 2010) began producing melatonin around 1 a.m. Whether this is in response to puberty or caused by teens’ nighttime behavior, is hard to say.

The key to resetting the body’s clock is to mimic a distinct repetitive pattern of light and dark.
Using special glasses, researchers in the 2010 study were able to reset the subjects’ internal “master clock.” Teens wore orange glasses at certain times to block the blue light, then were exposed to blue light and darkness at nighttime.

Adding to the sleep issues in teens is that most schools don’t have adequate electric light or daylight to stimulate the biological or circadian system that regulates body temperature, alertness, appetite, hormones and sleep patterns.

“Our findings pose two questions: ‘How will we promote exposure to morning light, and how will we design schools differently?’” says Dr. Figueiro. The findings present important implications for school design. “Delivering daylight in schools may be a simple, non-pharmacological treatment for students to help them increase sleep duration,” concludes Dr. Figueiro.

More on teenagers and sleep

Help teens get the sleep they need
How much sleep should your teen get?
Rare disorders could explain excessive sleep

12 hrs ago
by Sarah Cottrell