Does this scenario sound familiar? You’re at a restaurant and a child is peering over the booth, pulling on your hair. His parents? Sitting right there but doing nothing. 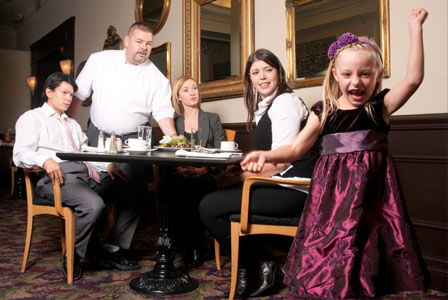 Or maybe you’ve been on the other side of the situation, and your child has been scolded by a stranger for having a tantrum. In a public place, do strangers have a right to discipline other people’s children? We asked moms to weigh in and tell us how they’ve handled these sticky situations.

Speaking up can backfire

Dawn Mooney, blogger and mom of two from Greenbelt, Maryland, recalls: “My husband walked over to a mom and simply asked if she could have her son sit down. (He was standing in their booth, which was perpendicular to ours, and he was chewing on a semi-deflated balloon that kept coming very close to my father-in-law’s head.)

About five minutes later, she came over to our table and all hell broke loose. Long story, short — we ended up needing to get the management involved because she would not leave us alone. She kept going on about how we were so disrespectful.”

But speaking up can also help

Laura, mom of two from California, tells this story: “My daughter went through a phase from about 18 months to 2.5 years old that was extremely trying. Each time we left the house, we dealt with behavioral issues. My husband and I have always been on top of it because we’re big on behavior.

One single time, a man gave her a talking to and to be completely honest, I welcomed it with open arms! It was the way he handled it, what he said and the complete lack of judgment that made it OK. My daughter was embarrassed and pulled it together faster than she ever had.”

So how do you intervene?

Remember, you don’t have all the information

And do you have all the information in a situation when a child is acting out? Laura adds, “I think it can be inappropriate for a stranger to say anything. You never know what kind of special needs or sensory issues that child is dealing with, so it’s presumptuous.”

Laura says the stranger’s lack of judgement when he gave her child a “talking to” made all the difference. But in Mooney’s case, she wishes the mother of the child in her story hadn’t turned the tables on her and her husband, calling them disrespectful even after her husband was polite. “If someone calmly and politely requests that you take action in regards to your child’s behavior, a polite response is in line, even if you don’t agree with the other person,” says Mooney.

Tina Avon from Montreal, who doesn’t have children, takes a different approach, “I pretty much always give them the evil eye — Yeah, I know it’s NOT appreciated by the parents, but let me tell you, a screeching kid is not appreciated by anyone either. When I was younger, all my mother had to do was look at me and it instantly stopped any thought I might have of throwing a tantrum.”

For Sheela Wolford, mom of two from New York, it’s easier to non-verbally support the mother of the child acting out. Wolford says, “When a child is being outrageous in public, I send smiles to the parent, mouthing, “It won’t be forever,” and then I sit back, thankful mine are grown!”

What if it’s your own child who’s acting out?

Is it easier to say something to another person’s child, but when it’s your own you tolerate the behavior? Kenan House, mother of three from Fountain Valley, California, says, “There are too many parents who turn their heads these days, and I just don’t have the patience for it. You are the parent! These kids are your responsibility and yes, they want boundaries. Please parent if you have kids! They want parents, not friends.”

Kenan firmly believes even if you’re disappointed to leave, you must remove your child if he’s acting out in a public place. “I’ve never had anyone say anything to my children who are acting out because they don’t have an opportunity to. My husband and I were out to dinner, our kids were not behaving… we took one look at each other, I took the kids out to the car and he told the waiter to pack up our food to go.”

Sometimes, a stranger can help

Many moms can remember a time when they got involved because a child was in potential danger or were thankful a stranger intervened and helped them, like Lisa Mitran, mother of four from Libertyville, Illinois. “I speak up if they are in danger or if I see them wander off and the parents can’t see them right away. I tell the parents, ‘They are over here,’ or ‘They went that way.’ Strangers have helped me when mine ran out of the store.”

More on kids and discipline

Evaluating your discipline techniques
Is it OK to discpline other people’s children?
3 Discipline mistakes parents make