Happy Wednesday Hump Day or, as we like to think of it, Celebrity Baby Bump Day! What a week for celebrity pregnancies! Jersey Shore star Snooki is pregnant and Saved by the Bell star Elizabeth Berkley announced her pregnancy this week as well! We spotted pregnant Jessica Capshaw at the Diane von Furstenberg GapKids launch and a knocked-up Kristin Cavallari wearing leather pants. Check them out here! 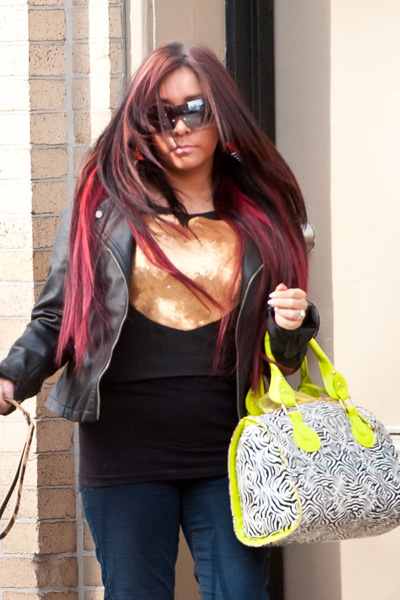 Snooki is preggers! The Jersey Shore star has confirmed to Us Weekly that she is pregnant with her first child and engaged to Jionni LaValle.

“I have different priorities now,” she told the magazine, revealing that she is 15 weeks along. “I don’t care what anybody else thinks. As long as I know I’m ready and he’s ready.”

“We are not going to screw this up,” LaValle said.

Snooki was spotted on Monday dressing her baby bump in a black top and carrying a large bag to show off her large engagement ring. The pint-sized reality star said she found out the baby news shortly after New Year’s Eve.

How do you think Snooki will handle the transition from GTL (that is Gym Tan Laundry for the uninitiated) to MOM?

Also check out: 5 Tricks to hide your baby bump >>