Reahmaria McMillan, 31, of suburban Detroit, moved with her three young daughters to a shelter when she felt she had nowhere else to turn. Her positive attitude helped her stay focused on saving money and finding a place to live.

Mothering in the suburbs and shelter

Reahmaria McMillan, 31, of suburban Detroit, moved with her three young daughters to a shelter when she felt she had nowhere else to turn. Her positive attitude helped her stay focused on saving money and finding a place to live.

For nine years I lived a comfortable suburban life with my boyfriend, the father of our three beautiful daughters. We had a nice townhouse apartment in a great school district where all the moms did things together. I worked for four years (catering, doing hair and babysitting), but the last few years I stayed home to raise my babies. I loved being there for every milestone. 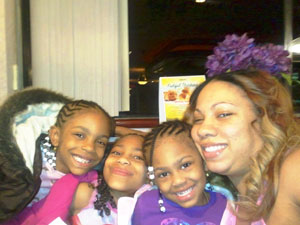 A few years ago my dad became ill and I took the girls to New Jersey to care for him for three weeks. When we returned we found that my boyfriend left and moved in with another woman. He took all the furniture, the TVs — even the kids’ beds. He said he wasn’t going to pay rent anymore, even though our three daughters lived there with me.

We went to live with my sister but she had her own family so we left after two months. We spent the next year living with my mom. I slept on the living room couch and the kids slept on the floor. It was too cluttered and congested because my two brothers also lived at home. One day I grabbed the phone book and started calling shelters. My kids had no idea what a shelter was.

I knew the staff at the shelter could help me get back on my feet. But the thought of going to a shelter was scary and stressful. I felt bad telling the girls that I couldn’t get them things they needed because money had to go towards a new place.

In 2010 I moved with my girls, then ages 2, 5 and 6, to a shelter. It was clean, with sectioned little rooms set up in a church basement. The workers cooked meals for us and greeted my kids with open arms. I knew I wasn’t going to end up in the shelter. I had a plan to get out fast and I refused to be negative.

The staff at the shelter helped me come up with a security deposit and three months’ rent for our own place. I had to prove that I could pay my rent once I moved. I had a bad knee and I couldn’t get a job on my feet, but I gave them proof of income with my child support. Within three weeks we had rented our own place.

But last Christmas, I couldn’t afford any gifts for my kids. I felt awful because I’d always come through for my kids at Christmas. Luckily, we were adopted by other families and they bought the girls’ presents. 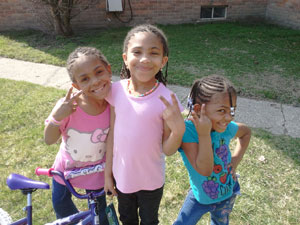 I have a lot of pride and I’ve learned to let some of it go, and that it’s okay to ask for help. You never know when you’ll fall on hard times.

We have a roof over our heads, food to eat and my girls now ages 8, 7 and 4 have plenty of toys. I don’t have a car but we manage to get around. I give all natural facials from home using fruits and vegetables and my goal is to get the capital I need to start an all-natural skincare line.

I don’t listen to the word no — just because I’m single and I have three kids doesn’t mean I can’t do something. I have to give my children a good life. I refuse to quit.

Tough times don’t last long if you have the drive and hunger to get out of your situation. Appreciate everything you’re going through because it builds character. It’s OK to ask for help. Never believe that you’re a failure. Smile — it has a powerful effect.

How to talk about the homeless with your kids
Moms of young kids deal with economic fears
Should you tell kids about family finances?