A father of four in Canada was arrested and strip searched after his 4-year-old daughter drew a picture of a gun in her kindergarten class. 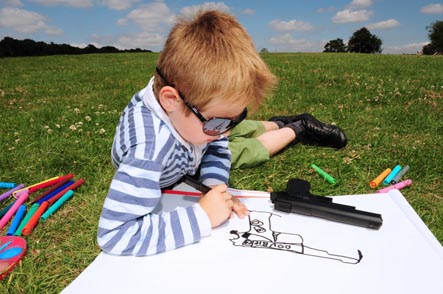 There are few topics more controversial than the use and ownership of firearms, especially when children are involved. Jessie Sansone of Ontario, Canada, would probably agree. Recently, this dad was handcuffed when he arrived to pick up his kids from school. The charge? Possession of a firearm.

Apparently, after his young daughter drew a picture of her daddy holding a gun to fight off bad guys and monsters, the teacher became concerned and the school administrators called Family and Children’s Services, who then called the police.

That same day, rather than an uneventful carpool line, Sansone faced handcuffing and an unwelcomed ride in one of several patrol cars waiting outside of the school. Sansone tells TheRecord.com, “I’m picking up my kids and then, next thing you know, I’m locked up. I was in shock. This is completely insane. My daughter drew a gun on a piece of paper at school.”

Your kids artwork: What to keep and what to throw away >>

Sansone’s ordeal continued once he arrived at the police station, where he was strip searched and questioned about the alleged gun. Seven hours later, after police determined the child’s drawing was based on a toy gun that shoots foam darts, he was released.

“My family has been tarnished,” he told TheRecord.com “My name has been tarnished. My children aren’t even going back to that school again.” In an ironic twist, Sansone is a counselor who speaks to school children about the danger of drugs, violence and bullying.

Find out what to do when your child is being bullied >>

Canada’s gun laws are different than those of the U.S., so setting the firearm-related charge aside, did the school overreact or were officials justified in having Sansone arrested? What would happen if your child’s school acted upon everything your son or daughter drew, did or said?

“If I was held responsible for everything my child drew, I would be in serious trouble,” says Eleana, a mom from Colorado. “My son draws pictures of super-galactic battles with all sorts of weird weapons. That doesn’t mean I have a light saber in my closet. I think the teacher should have reached out to the parents directly if she had a concern, but having this dad arrested was a bit over the top.”

“While I think the action taken was a bit extreme, I can appreciate the genuine concern for the well-being of the child,” says Amy, a California mom. “I’m for strict gun laws, but you have to use some common sense in a case like this where a child’s drawing is being used to initiate police action. I feel for the dad. It could have been handled better.”

Are you considering weapons play in your home? >>

In defending the actions of Family and Children’s Services, Alison Scott, executive director of the agency, told TheRecord.com, “From a public safety point of view, any child drawing a picture of guns and saying there’s guns in a home would warrant some further conversation with the parents and child.”

What do you think? Should a child’s drawing raise such concern or did officials overreact in this case?

16 hrs ago
by Emily Tisch Sussman