Dermot Mulroney is more than just a hot Hollywood star, he’s also a husband and a father of three. At a recent press junket for Big Miracle, Mulroney talked about the film and a number of other topics — including being a dad. 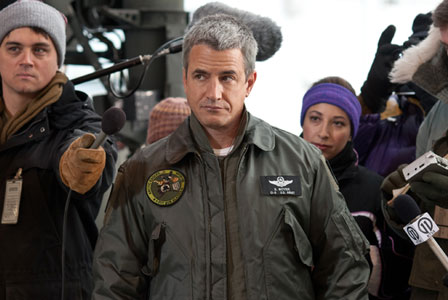 In Dermot Mulroney’s latest role, he takes on the task and the honor of playing Alaska National Guard commander Col. Scott Boyer in Big Miracle.

Mulroney’s character is based on real-life hero Tom Carroll. Big Miracle is inspired by the true story of three gray whales that became trapped under the ice off the coast of Alaska in 1988 and the unprecedented rescue operation which united people from around the world. In addition to Mulroney, the film also stars Drew Barrymore, John Krasinski, Kristen Bell and Ted Danson. Mulroney feels the film has the staying power as far as great feel-good family movies to be enjoyed now and for generations to come.

“Mark my words, 20 years from now, your kids will be watching this on DVD or however they do it then,” Mulroney said.

On the road again

Travelling for work can make it difficult for this sexy dad and his family. And though his wife, Tharita Catulle, can often come see him, the schedule is often too tough for his children to spend much time with their dad. Mulroney is the father of two daughters — Sally who is two and a half and Mabel who is almost four, and a son, Clyde, who is 12. The past year or so, their handsome dad has spent a lot of time on the road, travelling around the world for work.

“In the last 14 or so months since the start of this, these are the places that I had to go for work reasons: Anchorage, Toronto, Vancouver, Nashville, Pittsburgh, New York, Bangkok, Thailand for a month, Washington, D.C., and back to Bangkok, Thailand to finish,” explained Mulroney.

“It was just one of those years where I did a lot of movies. I wasn’t being paid great on a lot of them, so I had to do more just to even make my year. So it’s tough. This CSI at home with the grandkids [referencing Big Miracle co-star Ted Danson] sounds pretty good.”

Like many parents, Mulroney relies on extended family to help out with the kids when he gets busy.

“I have a mother-in-law who’s young and vital, so she’s indispensable,” Mulroney said. “She only has a six-month visa, though. So, she can only be in the country precisely six months a year. We used it like it’s gold. And I had all this business and this job came up [working on an episode of The New Girl with Zooey Deschanel]. So, we get her for three weeks and send her back to Italy, because later, if I’m working, I’m going to need her to come back so that we don’t go over the 180 days or whatever it is.”

Though balancing parenting and work can be difficult, Mulroney isn’t complaining.

“You’re asking do I choose roles because I have kids? No. But, when one like this [Big Miracle] comes up I jump at the chance because of that. So, I mean, I’d love to do a lot more work like that.”

15 hrs ago
by Bonnie Gibbs Vengrow