Can you imagine packing up your family and moving abroad? The thought may very well give you a slight panic attack… or it may induce a little spark of curiosity.

Raising three kids in the UAE 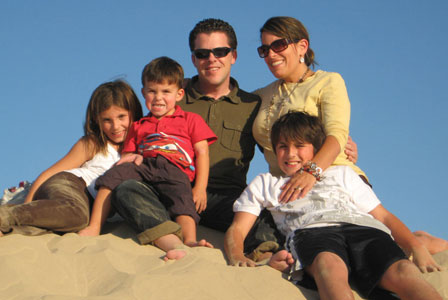 Either way, our new series, Families Around the World, will give you a sneak peek at American families who are living abroad — from far off exotic places such as Abu Dhabi in the Middle East to the bustling metropolis of Rome and everywhere in between. Stay tuned for a look at what life is like raising a family away from home. 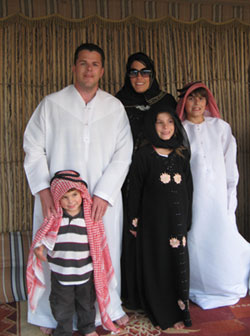 If you would have told Connie Faria that she would be living happily in Abu Dhabi (located in the Middle East in the United Arab Emirates) with her three children one year ago, she would have never believed you.

“The idea of living overseas was panic-inducing, literally,” Faria admits. But, the more moving to another country became a possible reality due to Brian’s job with the U.S. Federal Government, the more Connie became acclimated to the idea and realized what a great opportunity it would be for their family.

The Faria’s have been calling Abu Dhabi home since August 2011 and much to Connie’s pleasant surprise, it’s been an easy transition. The move itself was a breeze, much easier than Connie had anticipated, the kids have settled in to their new schools and on a day-to-day basis, life as a family in Abu Dhabi isn’t that much different that their life was in America.

First impressions of their new home

Connie admits that her first week in Abu Dhabi was difficult — the heat being a major factor. They arrived at the peak of the hot season in the UAE with temperatures hovering around 130 degrees F during the day. “It’s hot and sticky and I feel like I have too many clothes on,” Connie shared in a blog that she writes to keep in touch with family and friends at home in Ferndale, Washington.

However, there were also many things that Connie and her family were pleasantly surprised to find out about their new life in Abu Dhabi — that the signs on the highway and food labels were all printed in both Arabic and English, the shopping malls weren’t just filled with luxury designer brands… and that the heat will eventually taper off.

The Faria family also arrived in Abu Dhabi during the Islamic holy month of Ramadan, where Muslims fast until the sun goes down every day. For Connie and her family, this meant that they too couldn’t eat in public, or even chew gum, until after dusk. Luckily, they discovered a restaurant owned by an Australian couple that was completely enclosed with thick-black drapes so that non-Muslim families could eat during daylight hours without showing disrespect to the traditions of Ramadan.

With three kids, life for Connie and her family is similar to life at home in Washington — lots of running between activities, after-school sports and play dates with friends — even though they are half way across the globe.

The school-aged kids, Alexander, age 11, and Isabella, age eight, both ride the bus to and from school each day and participate sports and activities similar to those that they did at home — soccer for Isabella and baseball for Alexander. Those activities typically take the family to Dubai for games and tournaments — a fun adventure that is out of the norm now that they’re living in Abu Dhabi. Cameron, age three, attends preschool two days a week and spends the rest of his time with Connie, exploring the countless activities and play areas for kids in the city. 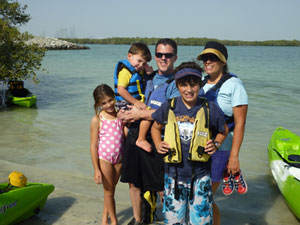 Connie, who was a Councilwoman for the City of Ferndale and a Kindermusik Teacher when they lived in the States, has continued to teach at a local preschool in Abu Dhabi. And now that the weather has cooled down, Connie loves spending her free time exploring the countless amazing beaches, meeting new friends for lunch (most of them are British!) and checking out new local shopping markets.

More than anything, Connie says that she wishes they’d taken the leap to move abroad sooner. As a mother, she’s learned that living anywhere with her family is truly a possibility and now that they are away from home and out of their “bubble,” she can’t wait to expose the kids to even more cultures and experiences in the countries around them.

Despite daily life in Abu Dhabi being quite similar to life in the States for the Faria Family, there are some things that certainly remind them that they are a world away. Here are the top three:

Having full-time, live-in household help is common practice for expatriate families living in Abu Dhabi. Most homes have maids’ quarters and having live-in help runs about $500 per month.

It’s common to see people throw garbage on the ground in Abu Dhabi — there are workers around the city who are constantly cleaning up.

Connie’s kids have been open minded about trying new foods that are common in Abu Dhabi, such as camel’s milk, camel meat, pigeon, dragonfruit and schwarma.

More on travel with kids

Travel kids for kids: 15 ideas
Top travel toys for kids
Travel with kids: Give a kid a camera