Your favorite team is playing in the Super Bowl, your jersey is laid out and your menu is planned. Just one problem — what are you going to do with the kids? If you want to spend Super Bowl Sunday watching the game and not the children, here are some party ideas to keep them entertained. 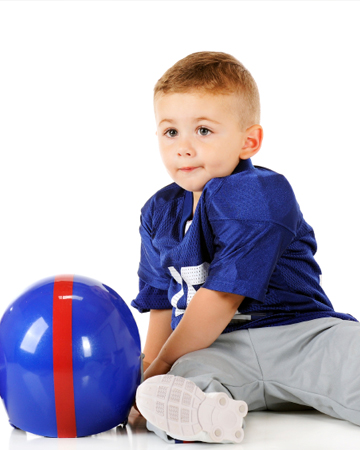 Tip: You’ve done your best to throw a great bash, but boredom could still set in. Have a movie on standby for your child and his friends to watch.

If you’re having people over to watch the Super Bowl, a fun idea is to also let your child invite a friend or two over for his very own party. Enlist your child’s help in the party planning process and put him in charge of decorating. A fun kids’ party idea is to give your child a few pieces of poster board and let him make posters for his party. One of them can read reserved for kids only.

What about game day munchies? Your child can also help you plan the menu and decide on some tasty Super Bowl recipes for the kids who attend. If you can set your child and his friends up in front of their own TV, all the better. And, of course, let your little one know that even though his party is for children only, your party open to all ages.

Get your child engaged in the game

Tip: For younger kids that might have to go to bed before the game is over (especially if you live on the East Coast), you can come up with a scoring system and hand out prizes at halftime.

It’s no secret that a lot of children — especially the younger ones — won’t be that interested in watching the Super Bowl. But there’s nothing like a fun game with some exciting prizes to change a child’s perspective, right? Before the Super Bowl starts, ask your child to make some guesses about what will happen in the game.

Come up with a list of questions, such as: Who will sing the national anthem — a girl or a boy? Which team will win the coin toss? Which team will score first? Depending on the ages of the kids, you can make the questions easy or harder. When the Super Bowl is over, tally up the answers for each child. Every correct answer equals one point and a certain amount of points equals a prize. Or every correct answer equals a prize. It’s your call — you’re the referee.

Set up a football-themed craft table

Tip: Stay away from projects that involve glitter, glue or anything else that’s messy. The last thing you want to do is clean up a spill in the middle of a big play.

Setting up an arts and crafts area is the perfect way to keep your child occupied during the Super Bowl. Spark his creativity with football-inspired crafts that can be made with things you might already have around the house. Some ideas include: making pompoms out of tissue, football players out of construction paper and team pennants out of felt. There are also free printable coloring pages that can be easily found online.

If you have good weather for Super Bowl Sunday, why not take the fun for kids outdoors? During the pre-game commentary, host a football game for the little kids to help them burn some energy. While some of the kids you invite may be involved in athletics already, remember that many are not. But what little kid doesn’t want to run? Make up some silly rules, put together a few teams and grab a Nerf-style football (softer for the kids to catch). Parents can play too, or cheer from the sidelines. If you keep it light and silly, everyone will have fun — and will be more likely to sit quietly once the real Super Bowl begins.

Check out the activities in our SheKnows activity center for kids >>

55 mins ago
by Kweli Wright