The controversial subject of letting babies cry it out has come to the forefront recently after Psychology Today blogged about the damaging, long-term effects of the practice. Some parents think this is a bunch of baloney, while others believe leaving a baby to cry is akin to abandonment. Read on and judge for yourself. 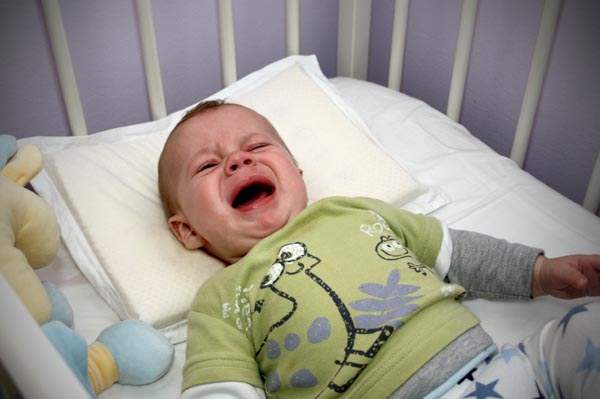 A recent blog post published by Psychology Today outlines the dangers of letting babies cry it out. The article dishes up a bevy of research that points toward psychological and even physical damage when babies are left to their own devices and has now gone viral, popping up on Facebook, message boards and blogs around the web.

The author of the article, Dr. Darcia Narvaez, briefly goes over the origin of the cry-it-out movement, which began with a heightened awareness of germs in the late 1800s that led to the idea that babies should be handled as little as possible. It took off even more with behaviorist John Watson, in the 1920s, who thought too much mother’s love would result in a “whiney, dependent, failed human being.”

Dr. Narvaez goes on to cite research that has shown that babies left to cry alone in their cribs suffer from extreme distress and the practice creates longterm effects, such as impaired growth and an inability to trust. Disturbingly, the neurons in the brain also wither away.

The studies were unsurprisingly met with mixed feelings. Jolene, mother of three, said, “I believe the studies are real science. I parent by instinct. When my baby cries my instincts tell me she needs me. I don’t let my babies cry it out.” However, Jessica from Minnesota bluntly told us, “The article was a load of crap. I agreed with absolutely none of it.”

Coming out of the CIO closet

Some blogs are weighing in on the debate, such as the popular mommy blog, Baby Rabies. Jill writes, “My one year old? She cries. Sometimes for long stretches. Sometimes while I lay in my bed, wide awake.” Her post set off a series of comments from moms offering encouragement and support because they do (or did) the same.

Charlene, mother of two, used the cry-it-out method with her older daughter. “You don’t just put them in their crib to cry all night,” she explained. “You go back in there after a few minutes and you keep reassuring them that you are there. It teaches them how to put themselves back to sleep. People think it’s terrible to let your child cry, [but] I think it’s terrible to not teach your child how to put themselves to sleep.”

Jessica agrees. “I don’t agree with letting your babies cry it out, but you can’t always meet their needs the second they need them,” she said. “Letting them cry to go so sleep is meeting their needs! To coddle them and not teach them to sleep on their own is sad.”

Crystal, mother of six, has experience helping her kids establish a routine without crying it out. “They’re all great sleepers,” she related. “Crying it out is archaic and absurd. It’s selfish. It’s unrealistic and unkind. Children can learn to sleep on their own in a peaceful and humane way.” Rebecca from Oregon agrees. “Don’t have kids if you’re going to abandon them in your own home!” she said.

Amy from Nebraska puts a personal spin on the subject. “I’m thankful my hubby doesn’t make me cry it out or sleep alone,” she shared. “Why should we treat the children any different?” And Debbie, mom of one, stated, “Don’t be lazy. Rock your kid to sleep, sing them songs, read to them.”

While the controversy rages on, moms do agree that we all strive to act in our child’s best interests. Crystal shared, “I believe parents who practice CIO are doing what they know, what those around them know, and possibly what their doctor advises. I believe they’re doing their best but there are other ways.”