Families around the world will be ringing in New Year’s soon and believe it or not, it’s not tradition in every country to watch a gigantic, glittery ball drop from the sky! Here are some ways families across the world celebrate New Year’s Eve. 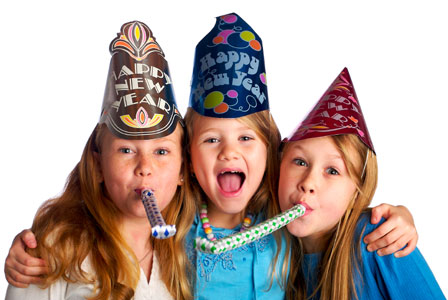 Despite the fact that December 31 happens during one of the coldest times of the year in Sweden, Swedish families love putting the traditions of Christmas behind them by getting out of the house to celebrate the arrival of the new year.

Just like we watch the ball drop in Times Square, Swedes tune in to catch the celebration at the Skansen Open Air Museum, located in Stockholm, where a translation of the English poem by Tennyson, Ring Out, Wild Bells, is read to the crowd to the ringing of actual bells when New Year’s arrives.

New Year’s celebrations in Russia are certainly all about family and in most places in Russia, it also begins a two-week winter vacation for school-aged children! Besides spending the day with family, Russia symbolizes the new year with a special tree — the Novogodnaya Yolka — which is topped with a star and covered in sweets. “Father Frost” also makes an appearance on New Year’s Eve, leaving gifts under the tree for good little girls and boys. Another popular New Year’s tradition in Russia is to have your fortune told to see what is to come in the new year.

If you’re a child in Greece, you could care less about Christmas — New Year’s is when the presents arrive! The New Year’s traditions in Greece don’t stop there. Greek families typically spend New Year’s Eve out and about — visiting with friends, shopping and strolling leisurely. New Year’s Day brings even more fun, with families playing low-wager card games of chance to see what luck the new year will bring them.

A country that is big on tradition, Italian families celebrate La Festa di San Silvestro on December 31, with huge feasts (mostly of lentils, which bring good fortune), festivals in their local villages or town squares and lots of dancing! The best fun fact about the way families celebrate in Italy is the tradition of wearing red underwear for the festivities — they are supposed to bring you luck!

New baby? All about celebrating your first New Year’s Eve with baby >>

Celebrating New Year’s in Thailand as a family will likely involve travel if you live in one of the larger cities, away from your home village. It’s tradition for Thai families to travel “home” for New Year’s Eve, where they will spend the evening hopping from house to house, enjoying food, family and gifts. On the morning of January 1, families in Thailand will put on their fanciest clothes and visit Buddhist temples, offering donations to the monks in hopes of good wishes for the coming year.