Houston mom Michelle Hickman recently reported an incident at her local Target store, alleging employees asked her to move while breastfeeding her infant son. Target’s nationwide corporate policy is also being questioned for ambiguous language. We break down the issue and talk to real moms about whether it’s okay to nurse while you’re shopping. 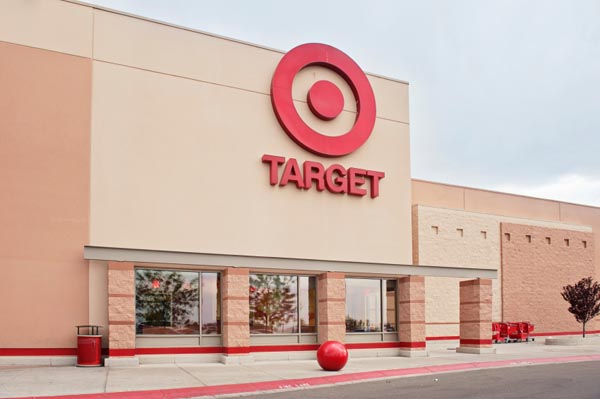 An incident took place at the end of November when a breastfeeding mom named Michelle sat down near a clothing display and breastfed her hungry infant. Fully covered by a blanket, she says that she was approached by two female employees who informed her they had been trained to redirect nursing mothers to the store’s fitting rooms. Michelle alleges that one employee made a comment, indicating that she’d be reported for indecent exposure.

After Michelle left, she called Target’s corporate headquarters and says she was taken aback at the ensuing conversation. She said, “The lady I spoke with told me that she and Target were aware of our legal rights as nursing mothers, but that Target has different policies because they are a family-friendly public place.” She felt outraged and humiliated as the conversation devolved further, with the Target representative allegedly saying that women shouldn’t walk around flaunting ‘it.'”

Target has been scrutinized in the media in the past when employees didn’t follow the nationwide chain’s corporate policy. The policy surfaced in the news in 2006 when a mother was told by an employee to stop nursing her baby in a fitting room and to go to a restroom instead. And most notably, a Michigan mother was escorted out of the store and the police were called after she was noticed breastfeeding her newborn in the electronics department in 2009.

“For guests in our stores, we support the use of fitting rooms for women who wish to breastfeed their babies, even if others are waiting to use the fitting rooms. In addition, guests who choose to breastfeed discreetly in more public areas of the store are welcome to do so without being made to feel uncomfortable.”

The policy, while it may sound great on the surface, really leaves a lot to be desired. Relegating a nursing mother to a fitting room sounds nice — it is, in fact, a clean area with a place to sit and relax. But to a nursing mother, this may sound like she needs to hide to nurse, when in fact breastfeeding in public is not illegal anywhere in the U.S.

The language in the policy is questionable as well. Nursing discreetly is often a goal of a nursing mother, but being discreet means different things to different people. For example, what if an employee believes that discretion means totally covered with a blanket, but your baby won’t tolerate one?

Were the employees in the right?

We asked mothers around the country to weigh in on the alleged actions by Target employees and representatives. Heather from California pointed out, “Hubby works at Target and says that at no point during their training are they told to ask a nursing woman to move.”

Jessica, a mother of five, has plenty of breastfeeding experience. “I never had a problem nursing in public,” she related, “but I have never tried to sit down in Target out in the open. Usually, I would go the eatery or the changing room. I do not think they treated her fairly at all.”

Chris from Missouri had a suggestion for Target headquarters in response to this situation. “I’ve been more offended by some people’s breath,” he shared. “If their corporate office says they support it, then they should stand on it. If lower-level employees don’t — or won’t — adhere to that policy, they should be terminated.”

Need to be discreet

Breastfeeding in public is always a debatable issue, but many people say that as long as the mother isn’t exposing too much of her breasts, it is fine. Lisa from Kansas said, “I am for breastfed babies, but this needs to be done in a discreet manner. For me, I consider this a personal thing and would not have done this in a public facility.”

Being harassed is one of the last things a new mother should have to worry about. Michelle, the mother involved in this story, had this to say to sum up her feelings about the incident: “It saddens me that mothers are being treated this way as if breastfeeding is vile and offensive. If this would have happened to me with the first child I nursed I would have considered giving up on nursing due to embarrassment and that is what concerns me the most.”

There is a nationwide nurse-in scheduled for Dec. 28 at 10 a.m. at every local Target store. Check out the Facebook page for more info.