It’s one of the moments parents dread most: being asked by their children, “Is Santa Claus real?” Learn how to break the news and when to keep the tradition and mythology alive in your child’s heart (and your own). 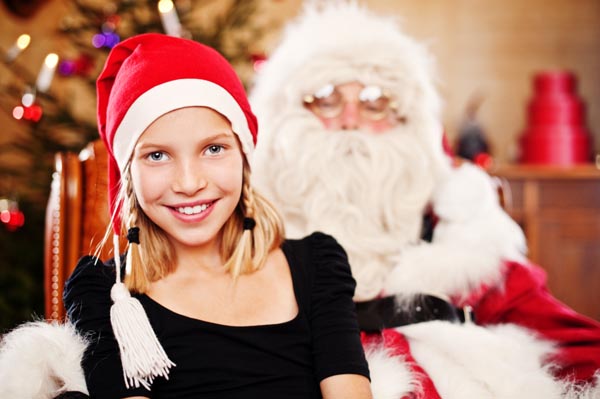 Is there ever a good time to tell your children the lore about the real Santa Claus? “You need to follow their cues,” says Carole Slotterback, Ph.D., author of The Psychology of Santa. “Answer the questions they ask as they come up. The kids are going to hear what they want to hear, and they will go through several stages of adapting their beliefs about Santa to fit new, contradictory information they have gathered.”

The truth behind children’s beliefs

The first research on children’s beliefs in Santa came from Frances E. Duncombe in 1896. She surveyed grade school children in Lincoln, Nebraska. “One of the questions was, ‘Should we teach the Santa story to young children?'” explains Slotterback.

The result? “Overwhelmingly, the older kids said yes — that it’s a fun tradition. The study was replicated in 1979 and, again, the children overwhelmingly related that they thought young children should be taught to believe.”

So if you dread owning up to the truth that you’ve been “lying” to your child about Santa all these years, perhaps the magic that you instill in them ultimately trumps the real Santa story.

History and origins of Santa Claus >>

Spilling about Santa for spite

“Often, kids hear ‘the truth’ about Santa from older siblings or kids, most often when they are upset with the younger kid,” says Slotterback. “Play it by ear. Listen to your child and the questions he or she is asking.” Sometimes the way your child words his queries about the Santa story can give you insight into where his head is. He may be letting you know that he suspects a rat but isn’t quite ready to know. Or your child may demand the truth.

“I played along as long as I could,” says Donna S. “They found out from friends, and I still told them that all the Santas here were helpers of the ‘real’ Santa.”

The question remains: what should you actually say to your child when they point-blank ask you if Santa is real? Even Slotterback isn’t certain how she’ll break the news to her 10-year-old son (they watch the NORAD Santa tracker on Christmas Eve). “I guess I plan on telling him that, at one time, Santa was a real person — based on St. Nicholas — but adults have taken on the giving role to keep his memory alive. So in one sense Santa is real — he is all of us!”

If your kids are willing to accept that explanation, you may have your solution. Or consider this comment from mom Mary W.: “Many people say they don’t believe in Santa, so for them Santa isn’t real. But Christmas is a holiday filled with magic that no one can explain, and you have to decide for yourself whether or not Santa is part of that magic. I’m grown up and I believe.”

Have you had to break the Santa news to your child? How did you do it? Share your story!

6 Expert Tips to Build — & Protect — Your Teen’s Self Esteem

4 hrs ago
by Elaine Roth