Recent ads put out by the Milwaukee Health Department, featuring a baby sleeping in bed with an enormous butcher knife, have riled parents over a practice that many contend is perfectly safe — co-sleeping. Some say the ads are over the top, yet others say they are right on. Come check out the rules of co-sleeping and find out what real parents have to say on the subject. 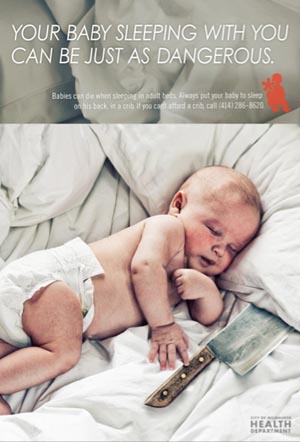 The ads, intended to be a public service announcement to warn parents of the dangers of co-sleeping, show a chubby baby bedded down with fluffy blankets and a large knife, with the caption, “Your baby sleeping with you can be just as dangerous.” While perhaps intended to educate, the ad instead relies on instilling fear instead of helping new moms understand how to safely co-sleep with their infants.

Co-sleeping is the subject of much controversy and elicits varied opinions. Pediatricians will often counsel parents to put their baby to sleep in a crib, but other doctors contend that it’s a safe practice as long as certain rules are observed and each parent is aware of them.

Kimmy, mother of three, has plenty of co-sleeping experience. She shared, “When you set up a crib, you’re told about not using blankets, pillows, bumpers or toys. Co-sleeping has rules too, but no one ever talks about them.”

Co-sleeping rules are nearly identical to those crib rules Kimmy spoke of. Make sure your bed is firm (avoid pillowtop mattresses). Keep blankets, comforters, pillows and other poofy items well away from your baby. The pictures in the ads show babies surrounded by tons of fluff — the exact opposite of the ideal co-sleeping arrangement. Co-sleepers are also advised to avoid this sleeping situation if you’ve had any alcohol or drugs

A lack of education may be to blame for the upswing in infant deaths in the Milwaukee area as well as other major metropolitan areas in the U.S. Heather, mom of a 1-year-old, noted, “Milwaukee has a pretty high poverty rate, and the zip codes with the highest infant mortality rates also have more teen pregnancies. There have been several studies that show a correlation between poverty and maternal education and lack of adequate prenatal care, along with studies that show a correlation of those things with infant mortality.”

Another consideration may be a high poverty level. Erika from Minneapolis stated, “They are targeting an issue responsible for few deaths, when the parents involved likely were co-sleeping not because they researched it, but because they have no choice (poverty).”

Some moms feel the focus of the ads — and the studies behind them — are all wrong. Vivid, mom of one, lamented, “Ugh — I saw this ad! I’d like to see the statistic of those children who are dying of ‘sleep related’ causes and how many are breastfed. And what other risk factors the children had besides co-sleeping, such as parents who smoke, bottles to bed and so on.”

Her opinion on feeding methods is similar to how Amy, a mom from Nebraska, feels. “Did you know that formula turns of a key switch in baby’s body, allowing them to sleep deeper? Thus, in turn, resulting in more SIDS related deaths.”

What it boils down to is while ads such as these have plenty of shock value, they mostly turn a parent’s worst fear into a possibility they don’t want to risk. Perhaps more time and money should be spent supporting parents and helping them learn how to co-sleep safely if they choose to do so, instead of sending this sort of negative message.

43 mins ago
by Arielle Tschinkel

10 hrs ago
by Elaine Roth