After giving birth to her first son, Huck, Kimberly Williams-Paisley wanted to explore different options for her second pregnancy. 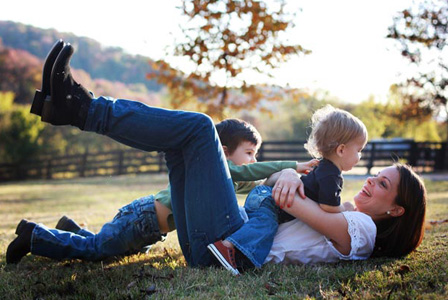 While everything didn’t go exactly as planned, the actress (you know her from smash hits like According to Jim and Father of the Bride) and wife of superstar country singer Brad Paisley remains content and positive about the way in which her second son, Jasper, was delivered. Here, she shares her story with SheKnows.

SheKnows: When you were pregnant, what options did you weigh for where and how to give birth?

Williams-Paisley: I knew I wanted a hospital birth for both boys. But both pregnancies were different. With Huck, I was a little more nervous, and so I went with a terrific doctor who was known for dealing with high risk pregnancies. Because of my age, I was considered “high-risk.” With Jasper, I’d been through the process once, I’d seen The Business of Being Born and I had a few things I wanted to try differently: I really wanted to have a natural birth. I used a midwife instead of a traditional OB-GYN. I hired a doula. I tried to line myself up for a natural birth in a hospital setting as best as I could.

SheKnows: What changed your mind or influenced this decision the second time around?

Williams-Paisley: I was induced when Huck was born because my water had broken and I had not gone into labor for 24 hours (hospital policy). I hated the feeling of the pitocin, and after two hours agreed to an epidural (which I should have just had as soon as I had the pitocin). I avoided a C-section that time, but I really wanted to go a more natural route the second time, and I figured going with a midwife would be a good place to start.

SheKnows: You actually worked with your doctor and hospital to allow for your birthing tub. How did you go about facilitating this discussion? How critical is it for a woman to engage in an active dialogue with her own doctor?

Williams-Paisley: I had heard so much about the soothing effects of warm water, so I got the hospital to agree to plumb in a tub. The midwives were happy — although to be clear, the tub was for labor, not delivery (hospital policy!) — they knew a lot of women would benefit from being able to use a tub during contractions.

But it was a big deal to complete the process. I spoke to the head of the department about it myself and relayed how strongly I felt about getting it done. Obviously, an active dialogue is crucial if you want your labor to be different from the norm. It’s also just useful to lay out with your doctor what you would like to see happen through the labor and delivery, even if you don’t want anything out of the ordinary.

SheKnows: What sort of research did you do for your water birth (or delivery in general) and what do you recommend for other women? Where should one begin her research?

Williams-Paisley: I read a lot of books about labor and delivery. Actually, I read too many, and it made me anxious. That’s why I recommend The Business of Being Born, but I would encourage people to watch it before they get pregnant or early on in the pregnancy.

The hypno-birthing course was very helpful. It’s all about positive affirmations. I got a book and CDs I listened to at home. It was like a nap I forced myself to take very day for 20 to 30 minutes, practicing the hypnosis. And I played the positive affirmations in the car. It was really awkward any time anyone got in to take a ride with me and this soothing voice came on telling me I am in charge of MY body and MY baby. You just gotta roll with it.

Learn about More Business of Being Born >>

SheKnows: You had some complications in your birth. Can you explain a bit what happened and how you coped?

Jasper was two weeks late, he was “sunny side up” facing up instead of down, and he weighed 9 pounds, 2 ounces. I went natural all night but when he started getting stressed out — his heart rate radically dropping — we knew a C-section might be the safest way to deliver him. It obviously wasn’t what I’d planned, and there was a part of me that was very disappointed, but more of me wanted my healthy baby safely in my arms. The doctors were concerned enough for my son that the answer was clear. The doctor who performed the surgery was fantastic.

My baby is now two-and-a-half and very healthy. He is a delight. We nursed for over a year. What’s the point in regret with something like that? I don’t think I would do anything differently in retrospect. Everyone did their best, and I’m happy with the outcome.

SheKnows: Why was it important for you to speak publicly about your experience on this docu-series?

Williams-Paisley: I hope women who have C-sections can feel good about their deliveries and let it go if a C-section was not the choice they planned for. I support what Abby and Ricki are trying to do in raising awareness about options for women and babies. I don’t judge anyone for any of the choices they make regarding their labor and delivery. I think any pregnant woman is a champion, and every baby born is beautiful miracle.