When Christy Turlington Burns gave birth to her first child, Grace, she opened herself up to two new roles: new mom and maternal health advocate. 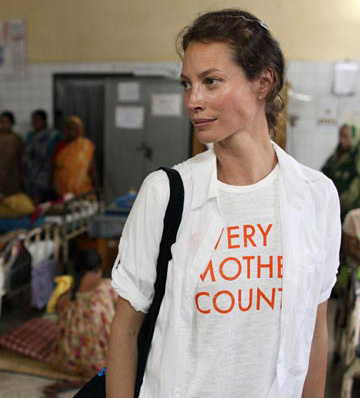 Now as the mother of two — she and her husband, actor and director Ed Burns also have a son, Finn — Christy is committed to her advocacy and mobilization campaign, Every Mother Counts, which helps ensure the well-being and health of women and mothers around the globe. Here, Turlington Burns shares her own birthing experience, why she opted for a birthing center and why she’s speaking out about it.

Weighing the options and making recommendations

SheKnows: When you were pregnant, what options did you weigh for where to give birth?

Turlington Burns: I wanted a natural birth so we considered all the options that would support us achieving that and therefore ended up choosing the birthing center at St. Lukes-Roosevelt. Ultimately, it came down to the midwifery practice (CBS Midwifery) we chose, and they were affiliated with St. Lukes.

SheKnows: What sort of research did you do and what do you recommend for other women?

Turlington Burns: I really liked the OB I was seeing at the time and she was a big supporter of natural childbirth, but the other doctors in her practice were not. Plus, the hospital she was affiliated with did not have a birthing center, so it made my decision to leave her care quite easy.

We then met our doula and through her, met several midwives and made our decision once we met the right team. I always share my experience with others who are open to hearing about birth options. I never assume anything about anyone and respect any woman’s decision if it is an informed one.

I always recommend My Best Birth and Choices in Childbirth for people who are eager to learn about the options available to them. I have also recommended my team to many friends. The key is we have options — more than people know to take advantage of. In so many parts of the world there are no options for women.

Learn more about More Business of Being Born >>

SheKnows: You’ve been open about the complications that arose with your daughter’s birth. Can you explain a bit what happened? 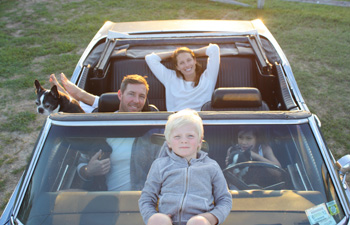 Christy Turlington Burns with husband Ed Burns and their children Grace and Finn.

Turlington Burns: I had a great first pregnancy and delivery, but never progressed to the final stage of labor — my placenta had to be extracted from the wall of my uterus, which leads to postpartum hemorrhage. In minutes, I went from feeling empowered to helpless and it was also excruciatingly painful. But I was lucky because my midwife and the OB who backed her worked so well together. Thousands of women with the same complication die.

SheKnows: You’re a very big advocate of women’s health. How did your own pregnancies and births influence your current path/advocacy?

SheKnows: Did your husband initially support the idea of a home birth/birthing center? If not, did you guys do your research together?

Turlington Burns: My husband fully supported a natural delivery but was nervous about a home birth, so we made a deal that the first birth would be at the birthing center and then the next would be at home. But after our experience, we decided neither of us would have wanted to have been at home with the complication I endured, so we had our second in the birthing center, too.

More Business of Being Born

SheKnows: What can other women hope to glean from the More Business of Being Born DVD series?

Turlington Burns: Women don’t share their birth stories enough. I think what is so beautiful about the DVD series is hearing everyone recount these important transitions in our lives.