Virgin Bella and Gentleman Edward get married and take things to the next level. The passion has been building — can your child handle what happens next? 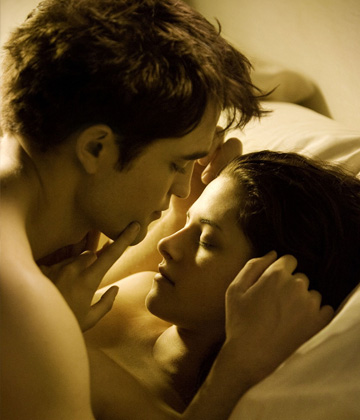 Breaking Dawn — Part 1 is the fourth (and next-to-the-last) film based on the hugely popular Twilight books by Stephanie Meyer. Breaking Dawn completes the saga and wraps up all of the storylines and does something else, too: It ventures from pure innocent romance to graphic sex, unplanned pregnancy and violent childbirth.

The movie rating PG-13 means “[p]arents strongly cautioned — some material may be inappropriate for children under 13.” The Twilight Saga: Breaking Dawn — Part 1 is rated PG-13. Will your child watch it?

Common Sense Media.org provides trustworthy information to help families make informed decisions about the media they consume, including movies, and had this to say about the new film:

“Unlike the previous films, in which Bella and Edward agree to remain chaste, this one begins with their wedding — and then goes straight into their honeymoon. So for the first time, there will be a true love scene and suggestive allusions to sex, albeit of the marital variety. This movie could also include some very bloody scenes, more werewolf drama and vampire violence.”

Ultimately, the decision comes down to you. As a parent, you know whether or not the content is appropriate for your particular child.

“When my daughter first showed an interest in this series, I decided to read the books myself first and found I couldn’t put them down,” says Anne Kimball, mom of six children ages 12 to 16. “I liked how the author handled mature material: Edward and Bella had respect for each other. Though young and impetuous, they waited till they were married before beginning a sexual relationship.”

Kimball says she didn’t find the books to be “overly explicit” and says she’s comfortable letting her daughter read the books and watch the movies. “I can think of no better example of a relationship for her to read about.”

“We will do online research to find out how much of the book’s sexual content is in the movie and make a decision based on that information. My daughter is 14-1/2 and is equipped to manage her interpretation of movies, so I will support her in seeing the movie unless there is a ratings or review issue that would preclude that from being a smart choice.”

What the author says

Stephanie Meyer herself said that she would have put a label on her fourth book indicating that it was suitable for ages 15 and up.

Motion picture ratings fail to distinguish violent content
Connections between media violence and aggressive children
Can you keep the media from being a bad influence on your child?

On the Day Before Inauguration, President-Elect Joe Biden Is Also Just a Dad Missing His Son