There’s a new girl in town and she’s getting a lot of attention. The same Barbie that we all know and love has a new look for 2011, thanks to a collaboration by Mattel and Los Angeles-based fashion company tokidoki. 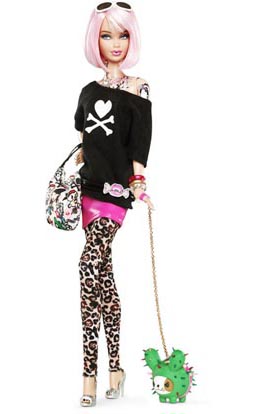 The cutting edge tokidoki doll, with a bright pink bob, leopard leggings and hot pink mini skirt, proudly bares one shoulder, revealing permanent tattoos across her neck, chest and arm. Never mind the puckered lips, fake eyelashes and cactus friend named Bastardino, this Barbie is causing quite a stir among some parents because of the tattoos.

Since the birth of Barbie in 1959, we have seen itty-bitty bikinis, Barbie’s pregnant friend Midge and a Barbie with temporary tattoos, but we have yet to see an inked version of the doll… until now.

Is Barbie evolving along with the rest of society? “It’s not any different than what they see on the street,” Christine says about her two young children.

Perhaps this is a sign of things to come in the land of Barbie.

As a future parent, Phil would like to see Barbie undergo some physical changes before he gets his panties (boxers) in a wad over tattoos. “We don’t live long enough to spend energy freaking out about tattoos. Have they made Barbie’s waist more than 14 inches or given her feet that don’t only fit into stilettos yet?”

While the tokidoki Barbie is marketed as a collector’s item for adults and only sold in select stores for $50, some parents are not happy about the message the doll gives.

“If I had a daughter, she wouldn’t own one… fake tattoos are good enough” says Melanie, a mom of two boys.

“I would not buy it for my daughter. I know that many girls look like that Barbie but I don’t want my daughter to look that way, so why encourage her with a doll that endorses it?” says Leah.

Other parents don’t seem to mind one bit.

Trista, a mom of three girls, says, “My kids use Barbies as props for pretend play, not as role models or to be ‘just like’ them. If it were cheaper, I’d probably buy it… Tattoos aren’t something to be afraid of.”

“Unfortunately, we all know that our children cannot be sheltered from influences so while I understand why parents are against it, it’s our job as parents to teach our children wrong from right or at least guide them to make an educated decision,” says Sarah, a mom of three.

Kelly has a bigger purpose in mind when it comes to the tokidoki doll, saying, “I would have used it as a lesson to remind [them] that real tattoos are forever.”

To collectors, tokidoki Barbie is a hot ticket item. She’s currently sold out on websites like Barbie Collectors and back ordered on the tokidoki website, where customers are limited to two dolls per person.

“What I don’t understand is why parents are putting up a fuss about a doll that will never see the shelves of a ToysRUs or Target,” says mom of two, Jennifer.

Collector item Barbie dolls are sold at exclusive locations and websites and are generally not available to young children. “Tokidoki fans are loving it because of the accessories,” says Jennifer. Maybe that’s what collectors were thinking when they bought this risqué Lady Gaga-looking Barbie for $150.

2 hrs ago
by Isobella Jade