Dads play an integral part in the life of a child as a role model, teacher, caregiver and breadwinner. Some dads step into the role of fatherhood easier than others, but all dads who make an effort to be a part of their child’s life are important. Read why these wives feel their husbands are great dads. 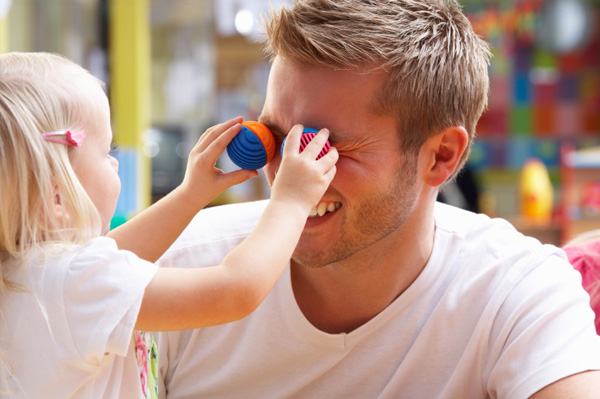 Listening to your children is one of the best ways to build a strong relationship with them, and Jessica Gottlieb of Los Angeles, California enjoys that her husband of 14 years is a great listener to their two children. “Dinnertime is this magical hour where my kids get to talk and he really listens to them,” she says. “He hears subtext in ways that I never have, and the kids share parts of their lives that I’d never thought of asking about.”

He has a soft spot for their daughter

Meagan Farrell of Monroe, Washington loves how her husband of 15 years is so amazing with their 10-year old daughter. She says, “He is never too busy or too tired to spend time with his little girl. Even though he’s a sports-loving guy’s guy, he willingly carries her Hello Kitty backpack when he is with her, and will paint her fingernails for her if she asks.” According to the U.S. Department of Health and Human Services, dads who have a close relationship with their daughters help them develop a healthy level of self-esteem.

Mary Castillo of Orange Country, California has been married to her husband, Ryan, for 10 years and loves how involved he is with their 6-year old son, William. “Ryan makes a point to be involved in our son’s activities,” Mary states. “From day one, he insisted on taking an equal share of the work. He took William to toddler classes, and now volunteers at the Fall Festival.” According to author Byron Ricks in his article 8 Ways Dads Benefit Boys in association with the National Center for Fathers, a positive, close relationship between father and son is a good foundation for teaching boys to become good men.

One aspect that some dads bring to the father/child relationship is their unique and creative way of teaching things. Silvana Clark, mother of two daughters, loves how this is true of her husband, Allan. “My husband is a wonderful, funny and creative dad,” she says. To help teach their daughter fractions, he helped her quadruple a recipe for chocolate chip cookies. Once, on the day after Halloween, he and their daughter bought 35 Halloween costumes that were on sale for 10 cents each. They made plans to distribute them to underprivileged kids the next year. Using his own unique way, Allan has taught their daughters many fun and useful life lessons.

Ashley Graham Gets Real About Her Stretch Marks: ‘Same Me, Few New Stories’

The Best Glue Sticks for Kids That Craft Often