New parents hate to see their newborn in any kind of discomfort or pain. Unfortunately, diaper rash is a rather common issue for many new babies. Find out how to diagnose and treat diaper rash with these simple tips from pediatricians. 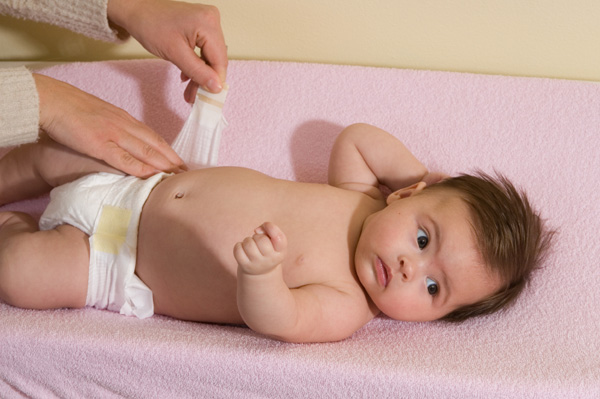 What is diaper rash?

According to Lauren Crosby, M.D., FAAP, of La Peer Pediatrics in Beverly Hills, California, diaper rash is a general term to describe the inflammation or irritation of the skin in the diaper area. “Treatment depends on the type of rash and how bad it is,” Crosby said.

How to prevent diaper rash

As a general rule of thumb, Altmann recommends applying a thin layer of petroleum jelly to your newborn’s bottom after every diaper change. Not only does this trick help prevent diaper rash in a newborn, but it also makes wiping off stool at the next diaper change easier.

According to Crosby, the best ways to prevent diaper rash are to change the diaper frequently to keep the area clean and dry, and to prevent prolonged contact with urine and stool, which can irritate the skin. “I always advise parents to blot the skin dry with a tissue after changing the diaper to ensure dry skin, then to apply an ointment such as one with vitamin A and D, petroleum or lanolin.”

During the first few weeks of infancy, diaper rash isn’t uncommon. “Most newborn’s bottoms can become red easily, especially with all the diaper changes associated with the newborn period,” said Erin Taback, M.D., founder of Oak Park Pediatrics in Oak Park, Illinois. In addition, Taback points out that your baby will be passing many small stools in the first few weeks — another cause of diaper rash for infants.

So, what exactly should you be watching for? Southern California-based pediatrician and pediatric advisor for The Newborn Channel, Tanya Remer Altmann, M.D., FAAP, recommends checking your infant for a red or irritated bottom.

For the general, non-fungal diaper rash, Crosby recommends using a cream that acts as a barrier between the skin and the diaper environment. “A cream that contains zinc oxide provides a good barrier as it sticks well to the skin and protects it, allowing it to heal,” Crosby said.

Altmann advises parents to apply this barrier cream with every diaper change.

So, with all the diaper rash creams on the market, how do you know which are best for your little one? Taback recommends Triple Paste (Target, $19) diaper rash cream to parents of her patients. “It is more expensive than others, but is very thick and works really well for very irritated bottoms,” she said. “I usually tell parents to apply it thickly and to try to leave it on as long as possible to provide a barrier between the diaper and the skin.”

If the rash is extremely mild, Crosby recommends trying other treatments, such as those with lanolin, vitamins A and D or petroleum, which can also be effective. One popular choice for moms looking for an all-natural product is CJ’s BUTTer (CJ’s Unique Boutique, $9), which comes in a wide variety of absolutely delicious scents and can be used with cloth diapers as well as disposables.

On the other hand, if the diaper rash isn’t improving with a zinc oxide diaper cream or is worsening, Altmann advises parents see a pediatrician, who may suggest a special cream (prescription or over-the-counter) for your baby’s needs.

Here’s What to Do With That Expired Car Seat

These New Viral Internet Challenges Have Parents Terrified — But Should They Be?