Have you ever forgotten or mistaken your child’s age? Parent brain — it affects us all. Even the president. Really, we mean it. 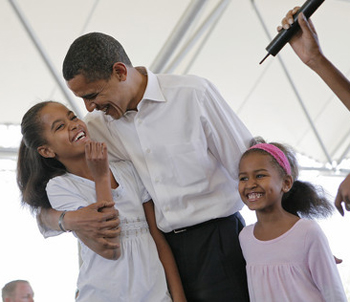 “How old are your kids?” It’s a simple enough question, but one that I am often left to pause before answering, thinking hard. Eventually I come up with a stuttering answer like “Six, well, almost six, and three…and a half.” It’s ridiculous, I know. I gave birth to these two sweet little beings, but if you ask me their ages, I am left stumbling.

It comes up often, too. Strangers, neighbors, coworkers — all asking the seemingly simple, easy question. And yet, it remains a thought process.

The fact is that I could sooner spout off their clothing sizes, what they ate for breakfast and their aptitude for spelling, math and other subjects. I know how many goals my son scored at his last soccer practice (two) and how long it takes to get from my house to school in traffic (seven minutes). I can tell you in a millisecond how many purses my daughter owns (five) and that she carefully chooses one each morning.

But in the grand scheme of things, their ages aren’t that significant. Their birthdays? Those I know, along with their grade levels and what their last report cards said. But age? It’s really just a number.

When it comes to mistaking my children’s age, I am far from the only parent to do this. Even President Barack Obama was caught in a age-snafu recently when he twice referred to his older daughter as 13 years old. She wasn’t yet. Malia didn’t turn 13 until July 4. Of course, there was a whole hubballoo about him not knowing her age.

Hey, if the president can err, so can I — and now, I don’t have to feel so bad about it.

Why it doesn’t matter

Ultimately, I do know how old my kids are, as I am sure President Obama does as well. And the fact that the age question throws me for a loop every time really comes down to a whole lot of, well, nothing.

5 Reasons why your kids should have cell phones
Field trip stops at…Hooters?
Mom confesses: I never liked my child