Lunchtime is the perfect time for kids to reboot and refuel for the rest of the school day, but if the lunch provided goes uneaten, it’s not doing them much good. While every child’s food preferences are a little different, hear how these real moms served lunchtime dishes that had their kids running home, begging for more. 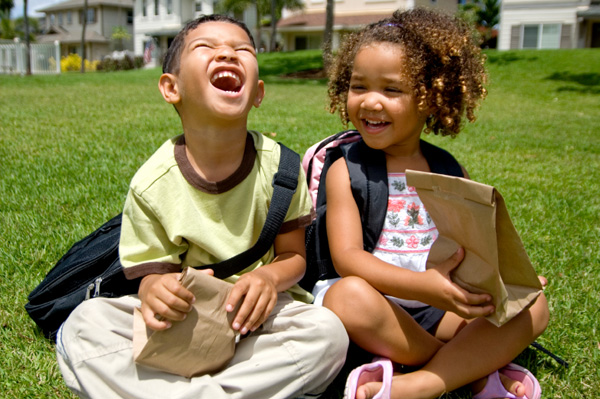 Pretty as a pinwheel

A sandwich is just a sandwich, but a sandwich rolled into a pinwheel adds a whole new level of fun. Raquel Scharf-Anderson of Scottsdale, AZ says that her kids love it when she flattens sandwich bread with a rolling pin, spreads it with cream cheese and jelly, then rolls the sandwich up before slicing it into smaller, pinwheel pieces. Just use a toothpick to pin the bread in place and your sandwich is ready to serve.

You don’t need to limit yourself to just jelly and cream cheese. Erin Mantz says she makes her kids turkey roll-ups with tortillas, turkey and spices. The fact is, you can turn almost any traditional sandwich into a kid-friendly pinwheel shape.

Apparently any food served on a stick will be a big hit with kids. Jennifer James from Oklahoma says that her kids love it when she puts strawberry and banana slices on a kabob stick. Holly Christopher from Norfolk, VA agrees, but she uses cantaloupe chunks and mixed berries instead.

The skewer trick works with other foods too. Scharf-Anderson says salad on a skewer is a hit with her kids. Her salad consists of “a chunk of iceberg lettuce, grape tomatoes and cucumber slices, served with a side of dressing dip.” If you have a hard time getting your kids to eat fruits and veggies, try serving them on a stick to see if you get a different result.

For the distinguished palAte

Not every child craves peanut butter and jelly or chicken nuggets for lunch. In fact, Eileen Wolter says her six-year-old eats more interestingly than she does. His favorite lunches include spinach tortellini, blue cheese and crackers or smoked salmon served with fresh raspberries. Talk about an adventurous palate!

Stephanie Leach of Families Eating Better shares that her son became more discerning after watching the first season of Jamie Oliver’s Food Revolution. Now, she says, “One of his favorites is a mini whole wheat pita pocket stuffed with hummus and thinly sliced cucumber and red bell pepper. He also likes me to pack him a Roma tomato that he can eat like an apple, sprinkled with a little salt.”

Christopher’s son also took a round-about road to a more discerning lunch. After begging to be allowed to buy lunch at school, he quickly discovered that the food was foreign and unappealing. This seven-year-old now packs “A cold barbecue chicken leg, chunks of cheddar cheese and kalamata olives.”

As all three of these moms can vouch, kids who have grown up trying new foods and learning to like healthier fare will jump at the chance to pack a lunch that reflects their budding tastes.