Carla Gugino sat down with us to talk about her new movie, Mr. Popper’s Penguins, which she says has “such a genuine heart to it.” She gave us the inside scoop on working with Jim Carrey and those crazy penguins — as well as advice for kids wanting to go into show business.

Carla Gugino chatted with us at a writer’s roundtable at the Beverly Hilton to talk about her new movie, Mr. Popper’s Penguins, which hits theaters June 17th.

Gugino, who has appeared in Entourage (Amanda Daniels), Californication (Abby Rhodes) and Sucker Punch (Dr. Vera Gorski), gave us the behind-the scenes scoop on working with Jim Carrey and Angela Lansbury on the fun (yet chilly!) New York set.

Based on the award winning classic children’s book, Gugino plays Amanda, who is amicably divorced from Mr. Popper (Jim Carrey)and is working on raising their two children as a single mom – until six penguins come along and turn their life upside down. 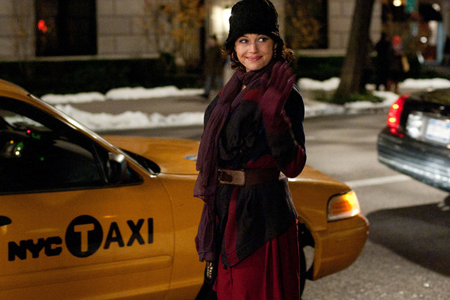 Were there any shenanigans working with Jim Carrey?

Carla Gugino: Well, Jim is amazing because every take he tries something new, and that’s always really fun to work with, or at least for me. It’s great because he’s just experimenting all the time.

It was hysterical because the penguins don’t function very well over 40 degrees. So, literally our set was 40 degrees and we shot in the winter in New York. We started sort of when it was still warm out, and then we were freezing on set. And then, finally the outside caught up to the inside. But, I’m not good in the cold at all.

And I thought — it would be so fantastic if they said, “Miss Gugino works best at 72 degrees,” because we have a set that’s 39 degrees for these penguins. And they are so sweet. You cannot not smile when you are in a room with penguins. They’re just the cutest things ever.

You play a divorced mom. Do you feel like a lot of kids and moms could relate to that, to your character?

Carla Gugino: For sure. I mean, it’s interesting because I think that there used to be such a thing about you need to be married to have children. There have been so many sort of unspoken rules. I have two stepchildren and they’re big now.

My only thing is, this is a completely subjective thing, that I think that that fantasy of your parents getting back together, you kind of want that to be if your parents really love each other, because the truth of the matter is, if it’s not a good relationship, obviously that’s worse for the children. 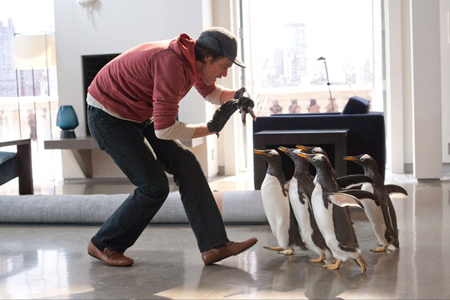 Was there ever a moment where Jim made you laugh and you couldn’t keep it together well?

Carla Gugino: Many, many moments. Yes, we definitely had a couple of really good giggle attacks.

And so, one morning we had a 6:00 a.m. call at the zoo, and it was so cold. I think it was 11 degrees with the wind chill, and we were outside. We’re dressed to look cool also. You know what I mean? So, we’re warmish but not really warm. And we have — in every pocket and everything we have, those little warmers and everything. 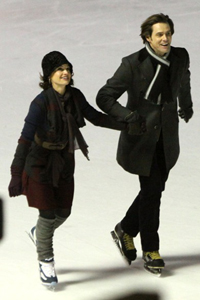 And so, there was a point at which Jim and I are doing the scene. And, we’re professionals and we’re there and we’re in it.

And then, at one point, we realized that our mouths are starting to freeze. So, Jim looks at me and he said, “We’re so looping the scene.” And we’re both acting as if it’s normal. And we said, “This is not normal behavior.” And normal people would not be outside right now. This is when you go inside to the warmth.

Clark Gregg is also hilarious, who who plays the penguin expert, who is in Thor and all sorts of other things as well. The three of us laughed a lot. And we had a really good group, because Angela Lansbury is also so incredible and also just witty.

And from the perspective, too, of women, I mean, this woman is just so inspiring. She is just truly a magnificent woman and actress. She’s 82, I think, and she’s just sharp as a tack. So, Jim and I were sort of marveling at her as well.

Which of the two Amandas you’ve played recently is closer to Carla? [Tough-as-nails Amanda Daniels from Entourage or Amanda in Mr. Popper’s Penguins]

Carla Gugino:  That’s funny. You know what? I probably have to say this Amanda is probably closer to me. Although there’s a little bit of both.

And which one’s more fun?

Carla Gugino: Yes, Amanda on Entourage is just like one of the my favorite characters I’ve ever gotten to play. I have a little bit of her in me, but definitely playing her is really fun because I’m not that much like that. I tend to have a more, probably to a fault, empathic nature. And Amanda is really good at taking care of herself. 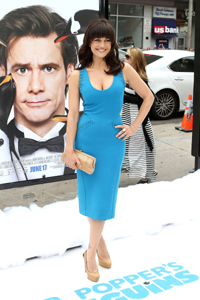 Do you have any advice for young kids that maybe want to get into acting, because you started as a Valedictorian? What’d you say to your parents?

Carla Gugino: They were very supportive is the truth, probably because I was such a serious student, that for me to then say that I wanted to do this they knew it wasn’t kind of a whim.

I guess the couple things that I feel are if you want to do it professionally, if you love anything else as much, I would say do the other thing. But, truly, because it is, it’s just such an incredibly challenging business. The work aspect of it is amazing, but the business aspect of it is no matter how successful you are, you’re turned down all the time.

But, the other thing that I would say is if you love it more than anything else, then it’s really just about honing your craft and getting into classes and getting good at something. But, also even, what’s amazing now is that you can film yourself doing a scene and put it on the internet. So, if you’re really good at something, you can get it out there so that people can see it.

And the truth of the matter is, the way that I got an agent was I was in an acting class and I was doing work that people seemed to think was good, and people came up to me and said, you know, “My agent is this person. Do you want to meet them?” And it really came organically through the work.

Had you read the book, Mr. Popper’s Penguins, before?

Carla Gugino:  Yes, but years ago to my godchildren and my stepchildren. It was funny because then this is such a modern version of it that I didn’t end up revisiting it.

But, I had always loved that book. And so many people come up to me about the book and tell me the impact that it’s had on them. And I think, again, that comes back to the fact that that book has so much heart.

Check out my interview with Jim Carrey here >>>