Jim Carrey sat down with us to discuss his new live-action family film, Mr. Popper’s Penguins, The larger-than-life actor was hilarious, as expected, but also genuine and surprisingly deep when talking about fatherhood.

The first thing that struck me about Jim Carrey is his presence. You literally can’t take your eyes off of him – call it star quality or charisma. He knows how to work a room and charmed me and all my fellow parenting writers as we chatted at the Beverly Hilton about his new movie, Mr. Popper’s Penguins. 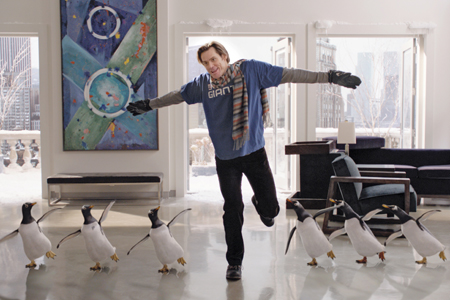 Based on the classic children’s book, Mr. Popper’s Penguins is about a man who mends his relationship with his family,  thanks in part to six hilarious penguins. Carrey plays a perfect Mr. Popper, combining his spot-on physical comedy with genuine depth and charm. The movie co-stars the beautiful Carla Gugino (Entourage, Sucker Punch) and the fabulous Angela Lansbury.

Wearing jeans and a black leather jacket and sporting a shorter and spikier hairdo than his Popper’s cut, Carrey pondered his role in Mr. Popper’s Penguins.

“I’m not the guy who really wants to go out of his way to do something soft, like without kind of a rock and roll edge to it. But, I really kind of felt touched by it. It was really nice,” he said.

The set of Mr. Popper’s Penguins had to be kept at a chilly 36-40 degrees Fahrenheit to keep the penguins healthy. When asked what it was like to work in those cold conditions, Carrey laughed, “horrifying.”

“It’s anything for the show. I’ll suffer greatly to do anything creative. But, I found out it wasn’t even necessary. It’s just that the penguins are method. Their Stanislavsky thing,” Carey joked, referring to the Russian director Stanislavski who developed the method technique of acting.

Carrey said that he loved working with the live penguins and said one of the craziest scene to film was when he was sitting at the table eating (or attempting to eat) with the penguins.

“A little madness, yes. And they were supposed to sit in their seats and peck the fish off the plate and everything…And then, by the time they pull the camera back, the penguins had gone so mental that they were just like, ‘Screw it,’ and they were up on the table, all over the plates and stuff, and all over the place. And inside my mind I’m just going, ‘This is amazing.'” 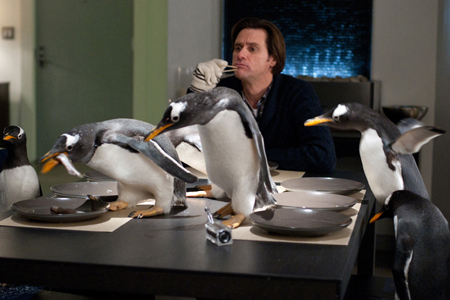 Carrey said that one thing he loved about this movie was that it explored the relationship between fathers and kids.

“That’s what really drew me to the movie, other than the fact that I love penguins, and I’ve said it, so many times before I ever did this project. But, the theme of somebody who is an adventurer but doesn’t explore his relationship with his own son is an amazing theme for me.”

“Certainly there have been times in my life when I was so crazed with Hollywood and everything that was going on that I missed time with my daughter. So, I understand that and how important that is. And so, that’s a theme that I’m ready to play. We’ve certainly mended anything that was going on between us. We’re closer than ever.”

Carrey says that when he felt his relationshp with his daughter was “slipping a bit” he “took a year and a half off. I didn’t work and I took those two years off to make sure that she knew.” 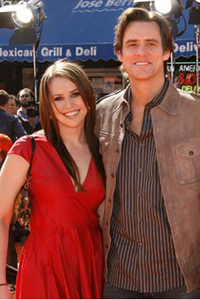 It is hard to believe, but Jim Carrey is a grandpa! His 23-year-old daughter, Jane (pictured, right), has a son named Jackson. He said he just hung out with Jackson the day before – and doesn’t quite call him “grandpa” just yet, but is mimicking him.

“He’s about a year and two months. So, he’s just kind of gah blah, or whatever. But, he does definitely mimic. And the great thing about him, you can see with kids, before they get squashed by anybody in school or anything like that, is there is this confidence of knowing that they are it. You know what I mean?”

Carrey has played so many hilarious characters (Ace Ventura, Dumb & Dumber, The Cable Guy, to name a few) — but which one is his favorite?

“I love all of them. It’s like Sophie’s Choice trying to pick them, you know? I love them all,” he said. “And every new one is a challenge. Every new character you got to fall in love with. So, I look forward to the next one I play.”

What does Carrey think makes a movie a classic, like so many of his movies have turned into? “What makes movies classics? Wow, it’s such an odd little space in the world when something becomes dear to people. Who’s to say exactly what it is? I have a feeling that it’s about an energy that people want to see. I always felt that about myself. It’s not as much what I do. I mean, I’m creative and different and I have a lot of guts to do certain things. But, I think the bottom line is I’m somebody people want to hang with.”

“Certain movies have a soul to them, that we just feel warm with. The old Jimmy Stewart, Mr. Smith Goes to Washington, there’s a soul in that movie that you just don’t want to give up. You want it to be a part of your life, you know?” 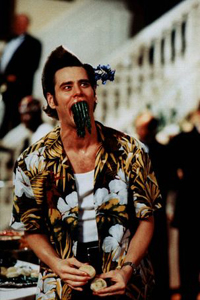 “So, I’m really lucky. I feel super lucky that a lot of things that I’ve done are now just reintroducing themselves generation after generation it seems. And I still have little kids coming up to me about Ace Ventura and The Mask. And I say,  ‘Well, thank you. Wow, what a wonderful place to be.’ I’m going to be like 90 years old and 30 year olds will be coming up to me going, ‘Dude, a thousand times I’ve watched that thing,’ It’s a pretty great place to be.”

When asked when he knew he was going to be an entertainer, Carrey reflects on his childhood and his father.

“Since I was a little tiny kid, since I can remember, because I used to look at my dad and he used to command the room. And he was one of the funniest human beings you’ve ever met in your life. I mean, seriously like a file of jokes and funny stuff, but off the cuff funny.”

“Rodney Dangerfield used to just be blown away by my father. I’d bring him down to see me in Vegas opening for Rodney Dangerfield. And, Rodney would just be sitting there saying, ‘Who is this guy? This guy’s incredible, man. Where the hell have you been?’ [Carrey breaks into an amazing Rodney Dangerfield impression]. You know, that kind of thing.”

“And he’s Percy, Percy Joseph. He was just one of these characters that when he told a story, he was so incredibly animated. The character I played in Truman Show was my father.” 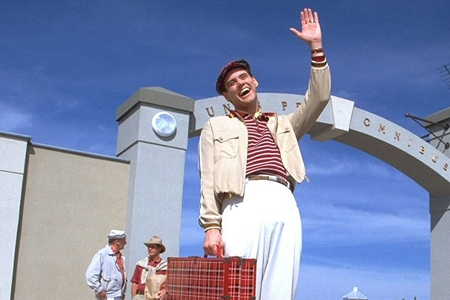 [Ok, I have to admit I died a little when I saw him do The Truman Show line right in front of me. Pinch me, now! ]

Growing up, Carrey said Dick Van Dyke inspired him to be who he is today. “Recently, he was on the Rachel Ray [Show]and he said some really nice things about me,” he said. ” It was like Christmas. I was out of my mind with joy. I really loved it. And he said something about if somebody was going to play him or play, you know, the Dick Van Dyke show now or whatever as a movie or something that he would want me to do it.” 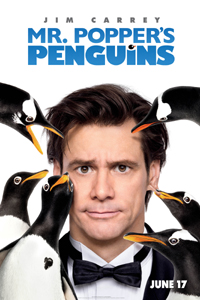 Carrey said with a huge smile on his face that he invited Van Dyke to the Mr. Popper’s Penguins premiere and he was excited that he was coming.

Was Carrey somewhat of a class clown and would he get into trouble at school? Yes, but he talks about a teacher that figured out how to channel his energy.

“I did until I had one teacher that was so smart in the sixth grade. She talked to me later. But, she sent me back a lot of the pictures of her being assassinated in several different ways that I used to draw at the back the class. She confiscated them in school, and then she sent them back to me when I got famous. You know, the missiles hitting her and stuff like that.”

“She knew because I would always finish my work first. I was really smart in school. And I would finish and then I would disturb everybody by being funny and doing disruptive things in class. And so, she had the brilliant idea of saying, “Jim, if you just sit there and be peaceful, be calm, don’t bother anybody after you finish your work, I’ll give you 15 minutes at the end of class to do whatever you want in front of the class.”

“And so, I would finish my work and then I would start writing routines. And I would write, ‘Okay, today I’m going to imitate the principal in the boy’s locker room looking at their underwear,’ and stuff like that. And I was completely politically incorrect and all of that stuff.”

“But, she came up with an idea. It’s like such a clue into kids. Instead of giving them drugs for ADD, find an outlet. Find something to do with that, because it’s just that they’re special.”

19 hrs ago
by Anna Davies