James Tate wanted to ask his friend to the prom in a big way. But his fun romantic gesture turned sour when school officials suspended Tate and banned him from the prom. Is the school taking it too far? 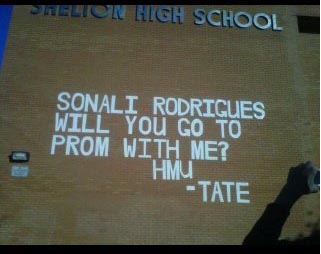 James Tate wanted to make a grand gesture to invite his friend Sonali Rodriguez to the prom. His brain storm? Cut out giant cardboard letters and tape them on an outside wall of the school. The message was short and sweet: “Sonali Rodrigues, will you go to prom with me? HMU — Tate.” Sonali did HMU (that’s short for hit me up) — with a big yes.

But the pair won’t be heading to their senior prom together because school officials have prohibited Tate from attending prom.

See, while most of the country would have awwed over the gesture, school officials only saw rule breaking. Tate taped the letters to the wall on a late Thursday night without permission. Two friends helped him in the late night endeavor, one holding a ladder and the other handing up pre-taped letters for easy hanging. Officials say the boys trespassed on school property and that their actions posed a safety risk. So, Tate was suspended for one day from school and banned from the prom.

People were hopeful for a reversal of the decision, especially when a press conference was called. However on May 12, the school’s headmaster (the school uses the term headmaster instead of principal) simply reinforced Tate’s prom ban. Headmaster Beth A. Smith said in a statement that the school is a place of learning “where students are expected to meet high academic and behavioral expectations.”

She also said that the practice of banning kids who’ve been suspended after April 1st has been in place for many years, and that students and parents are aware of that. All she did was follow protocol.

Reading about the story, you can’t help but wonder if Shelton is a magical district free from the usual high school issues of drugs and violence, somewhere where taping letters to an exterior wall is the worst thing a student has done.

There have been 22 arrests at Shelton High School this year, police say. “The number is about average for the last five years — no significant increase or decrease. The most common arrests are for fighting, disturbances, alcohol and drugs,” says police Capt. Michael P. Madden. Somehow, this doesn’t seem to compare to drugs or fighting.

Of course, Tate’s actions could also add to the statistics. According to Madden, it is possible for the school to push for Tate’s arrest for the trespassing. “The school could press for Simple Trespass, which is a mail-in infraction for the mere fact that a reasonable person knows they are not suppose to be on school grounds after hours. But as for Criminal Trespass he is a current student who had no criminal intent, so I don’t think the court would be too comfortable trying that case,” says Madden.

Is the decision too harsh?

Officials in Shelton chose to levy a one-day in-school suspension and the accompanying prom ban. They could have taken a legal route and haven’t. That said, is this decision just too harsh?

Schools have rules for a reason: To keep kids safe and create environments of learning without disruption. James Tate didn’t disrupt the school day. He didn’t even risk anyone’s safety. (Yes, he used a ladder. But he brought friends to be sure that the ladder was safely used.) He didn’t vandalize the school. He used easily removable cardboard letters and tape. James Tate did not break into the school, but rather freely entered the campus and stayed outside.

The school’s stance on this issue — and the punishment that has been levied — is rigid and unwavering. It shows students that life isn’t always fair. It shows that good intentions, even when well-received, can be viewed in a wildly negative light by others. And it shows that second chances don’t always exist. Some pretty harsh lessons, I think.

James Tate has apologized repeatedly for what he did. Yet, officials haven’t relented. Instead they created a spectacle, calling a press conference to reiterate that they aren’t changing their minds.

The school is teaching all the wrong things here. The decision lacks compassion with its one-size-fits-all approach. The school has taken a firm stance that mitigating factors (this was a nonviolent incident that left zero damage) don’t matter. And the decision fails to account for the widespread support that Tate has garnered at home and across the country. More than 150,000 people have shown their support for Tate on a Facebook page! If this were an election, Tate would be in office. But it’s not.

If we want the next generation of business and political leaders to govern in a way that is kind, compassionate and fair, then we need to exhibit those qualities as adults. If we want kids today to grow up with a respectful attitude, we need to be respectful ourselves. And if we want the widespread bullying to stop, we can’t have school administrators bullying a kid who just wanted to take a girl to the prom.

>> What do you think? Did James Tate receive the punishment he deserved for breaking the rules, or is this a case of taking a policy too far? Weigh in on our poll or share your opinions in the comments section below!