News of a young baby being patted down by screening agents on behalf of TSA in the Kansas City International Airport has some people outraged, while others defend TSA’s procedures as necessary for our security. What do you think? 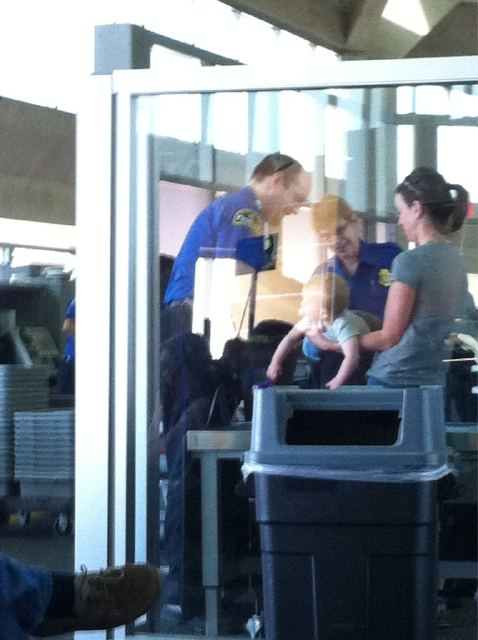 What was a routine trip through security turned into a pat down for an eight-month-old baby…and a nationwide news story. Reverand Jacob Jester used his phone to snap a photo of TSA agents patting down an infant during a security check. He then tweeted it with the following statement:

When he tweeted the picture of a baby being patted down, he had no idea what was about to happen. Ah, the power of social media.

According to the TSA, the baby’s stroller set off alarms during a screening for explosives. As a result, the screeners — who were from a private agency, working on behalf of TSA and following TSA’s procedures — patted down the baby.

On The TSA Blog, Blogger Bob of The TSA Blogging Team responded to an article criticizing the agents’ actions: “Our officers followed proper current screening procedures by screening the family after the alarm, who by the way were very cooperative and were on the way to their gate in no time. The child in the photo was simply receiving a modified pat-down which doesn’t even come close to what the headline implies.”

Reverend Jester, who took the photo that went viral, said he felt the pat down of the baby was too much. He spoke to The Kansas City Star, saying, “An 8-month-old doesn’t pose a threat to airplane or national security. I am grateful for TSA’s willingness and desire to protect, but I believe in this instance that was extreme.”

One commenter on the article asked, “So it’s okay with you for strangers to grope your kids?” Another was concerned for her future trip: “I’m flying with my 3 year old twice this year. If TSA or “private screeners” try this I will RAISE HELL.”

Others disagreed, insisting that babies could in fact be used to conceal dangerous items. As one person said, “Someone needs to fill the Rev in on some very sad facts…Babies are used daily, to conceal narcotics…Babies have been used before in the middle east by terrorists to hide/use explosives…It’s people being naive like this, that caused this story to be bigger than it ever needed to be.”

Another pointed out the demeanor of the mom and the agents: “HONESTLY all of you people need to calm down. Look at the photo …. the TSA agents are grinning, as well as the mother and the baby having fun with it. The security alarm went off and the agents have to search. They did it in a non [invasive], professional manner and with the

families consent. What do you want?…”

>> How do you feel about patting down an infant? Can you understand why the agents did it after the stroller alarmed? Or do you find it an unnecessary measure? Share your thoughts in the comments section below or vote in the poll.